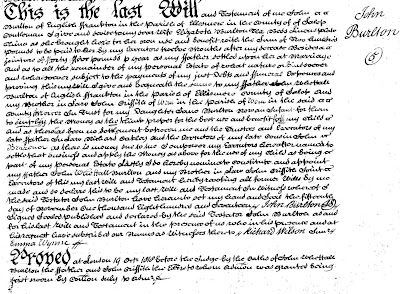 In summary, the above will states:
Last will and testament of me, JOHN BURLTON of English frankton, parish of Ellesmere, Gentleman.
- Give and devise to my dear wife ELIZABETH BURLTON the beds, linen, plate, china as she brought here for her own use and benefit with the sum of £200 to be paid by my executors twelve months after my decease besides a jointure of £45 per year as my father settled upon her at marriage.
- Remainder of my personal estate to my father JOHN WHETTALL BURLTON of English Frankton and my brother-in-law JOHN GRIFFITH of Wem in trust for my daughter JANE BURLTON now an infant for them to employ the money as they think proper for the best use and benefit of my child.
- And as there has been no settlement between me and the trustees of my late father-in-law RICHARD OAKLEY and the executors of my late cousin JOHN BRAZENORE as there is money due to me I empower my executors to settle that business and apply the money as above for the use of my child.
-I appoint my father JOHN WHETTALL BURLTON and my brother-in-law JOHN GRIFFITH joint executors.
Written: November 15, 1817
John Burlton died: March 13, 1818.
His infant daughter Jane Burlton died August 31, 1818, aged one.
Posted by Sherro46 at 10:50 PM