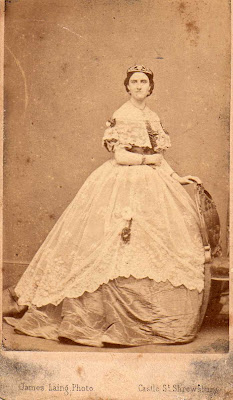 1. JANE ELIZABETH OAKLEY.
Pictured above, Jane Elizabeth Oakley was the elder of two daughters born to John Bourne Oakley and Ellen Eliza Lewis. She was born on Friday,October 27, 1837, at Ellesmere, Shropshire, and was baptised two days later on Sunday, October 29, at Cockshutt.
Her upbringing would have been comfortable, if not overly wealthy. Her father John classified himself as a "Gentleman", which means that for the entirety of his life he never worked, but relied upon income from various bequests in wills. This included land around English Frankton that he inherited, and although he described himself as a 'retired farmer' in the census of 1861, he would have relied totally on agricultural labourers to do the farm work, certainly not himself!
When Jane was almost eight years old her sibling Margaret Ellen Oakley arrived. Margaret was born on July 18, 1846, at Frankton, and she was baptised at Cockshutt on July 23, 1846.

The census of 1861 revealed that 13 year old Jane Elizabeth was living away from her home at English Frankton, and residing at Ellesmere with three other female pupils at a small girls' school.

John Bourne Oakley was the first cousin of John Oakley, a wealthy grocer from Shrewsbury who had established himself in London with a lucrative partnership in the Fortnum and Mason Store in Piccadilly.Their fathers were brothers John Oakley and Timothy Oakley, who had died within several years of each other in the early 1820s.
The two cousins must have maintained family contact with each other, as two of their children became engaged to be married in the mid-1850s. Edwin Thomas Oakley was the third son of John Oakley and Jane Meabry, and had been born in Westminster c. 1834. He fell in love with his second cousin Jane Elizabeth Oakley, and they were married on Wednesday, November 3, 1858, at Saint Mary's, Shrewsbury.
Jane was 21 at the time of her marriage, and had been living at Shooters Hill, Clive, with her widowed great-aunt, Jane Burlton Griffith, who was her deceased grandmother's sister.
Witnesses at the marriage were Edwin's brother William Alfred Oakley and two females named Jane Birch and Sarah Ann Brookes, perhaps friends of Jane Elizabeth's.
At the time of his marriage, Edwin Oakley was a merchant in Birkenhead, Cheshire, and it was to here that he returned with his new wife. Jane quickly fell pregnant with her first child, and their son John Griffith Oakley was born in Birkenhead on Saturday, October 8, 1859.

When Jane Oakley's great-aunt Jane Griffith died on January 1, 1861,she and her sister Margaret were the main beneficiaries of the will. The Oakley family moved into Shooters Hill, which gave Jane a reprieve of several years from her husband's none-too-successful business ventures.
On New years day, 1863,at Shooters Hill, Clive, Jane Elizabeth Oakley gave birth to her second child, a son named Harry Meabry Oakley. The 'Meabry' second name came from his paternal grandmother, Jane Meabry, who had married John Oakley.
A daughter followed the following year....on Sunday, March 13, 1864, at Shooters Hill, Clive, Jane Elizabeth Oakley gave birth to Amy Jane Oakley, her only daughter.
Towards the end of 1868,in Liverpool, Jane Elizabeth Oakley and Edwin had their final child, a son named Edwin Burlton Oakley. He lived for only three months, dying of convulsions on December 13, 1868, at 131 Islington,Liverpool.
Although the Oakleys were residing in Liverpool, the newspaper notice of baby Edwin's death stated that they were "of Shooters Hill".
The death of her fourth and final child heralded the start of a traumatic time for Jane Elizabeth. The following year her husband again got himself into financial difficulties. A notice published in the London gazette of December 14, 1869, stated:
" Edwin Thomas Oakley of Magdala St, Smithdown Road, Liverpool, County Lancaster, in lodgings, out of business, previously of Chatham Street, In Liverpool, out of business, and previous thereto of 131 Islington in Liverpool,Wine Merchant, Aerated Water Manufacturer and Ale and Porter Bottler, adjudicated bankrupt( in forma pauperis) on the 15th day of October, 1869.
( Definition: IN FORMA PAUPERIS - Lat. 'in the form of a pauper.' Someone who is without the funds to pursue the normal costs of a lawsuit or criminal defense. Upon the court's granting of this status the person is entitled to waiver of normal costs and/or appointment of counsel.In English Law, when a person is so poor that he cannot bear the charges of suing at law or in equity, upon making oath that he is not worth five pounds and bringing a certificate from a counselor at law that he believes him to have a just cause, he is permitted to sue informa pauperis, in the manner of a pauper; that is, he is allowed to have original writs and subpoenas gratis and counsel assigned him without fee.)
Poor Jane would have gone from a very comfortable living in a beautiful country home to lodgings in Liverpool within a matter of a year or so.To compound matters, she fell ill, and in the ensuing months became worse rather than better.Her attending physician dignosed her with disease of the ovaries, and at the age of 34 years, Jane Elizabeth Oakley died.
Just prior to her death, the 1871 census return shows that the Oakleys were residing at Monks Coppenhall, near Crewe in Cheshire. The information reveals that on the night that the census was taken- Sunday, April 2, 1871- the Oakley family was split in two, with parents Edwin and Jane staying at a Temperance House in Crewe, and the three children at their home 46 Beech Street, Monks Coppenhall, with a servant, widow Elizabeth Smith.
Jane was only six months away from her death, and would have been very ill. Most likley her husband had taken her away for complete rest, for either the weekend or a little longer.
Jane Elizabeth Oakley died on Tuesday, October 31, 1871, just four days after her 34th birthday.According to a story told by her son, Harry Oakley, to his own children, Edwin was absolutely distraught over the death of his wife. At the graveside he is supposed to have thrown himself on Jane's grave, weeping unconsolably. I can't verify this story, nor can I even locate the final resting place of Jane Elizabeth Oakley. I had the records checked for Monks Coppenhall Cemetery and she was not buried there, so she may very well have been taken home to Shropshire for burial at either Clive,the cemetery closest to her home at Shooters Hill, or even English Frankton or Cockshutt where she grew up.
Jane's children were aged 12(John),8 (Harry)and 7(Amy Jane).Almost three years later their father married again. Elizabeth Jane Turner was the 25 year old daughter of John and Elizabeth Turner of Moss Side, Manchester, and as well as being the step-mother of John, Harry and Amy, she also gave birth to three more children with Edwin.

I really connect with Jane Elizabeth Oakley. Her portrait, sent out to Australia to Harry Oakley by his aunt Fanny Fortnum Oakley Scorer, hangs on my wall, and I often look up at her and imagine the anquish she must have felt at leaving her three beloved children. Following this blog is a letter written to her second child, Harry, when he was just a little boy, and she obviously doted upon him.
Posted by Sherro46 at 5:39 AM