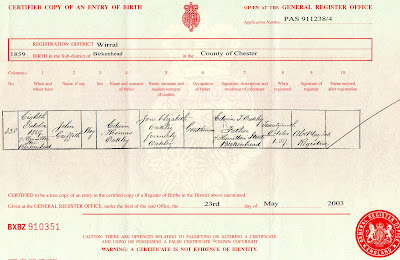 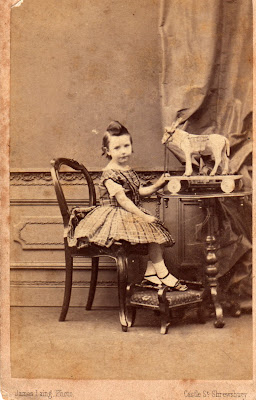 1. JOHN GRIFFITH OAKLEY:The eldest child of Edwin Oakley, John was the first child born of the marriage between Edwin Thomas Oakley and his first wife Jane Elizabeth Oakley. He was born in Birkenhead, Cheshire, on October 8,1859, and was three years old when his first sibling, Harry Meabry, arrived in 1862.The photo above was taken of John when he was aged about three, in c. 1862. It was the fashion in those times to dress little boys in dresses prior to them being considered old enough to be put into trousers.
John's early years were spent at Shooters Hill near Clive, in Shropshire, with his parents, brother Harry and little sister Amy Jane, who was always known as 'Jean'.Towards the end of the decade the family moved to Liverpool for Edwin's business, which failed, and then by 1871 were in Crewe, Cheshire.John's mother, Jane Elizabeth, had contracted ovarian cancer, and she died just after John's 12th birthday, in October of 1871.
The Oakleys moved to Manchester, where in August of 1874 John's father married Elizabeth Jane Turner, thus providing his three children with a step-mother. Soon John had a new sibling when Albert was born in 1875, but his brother Harry was having issues with his new family arrangements so he moved to Newtown in Wales to learn the wine merchant business.
Twenty one year old John Oakley was still living with his father and step mother at the time of the 1881 census. The family were at 57 Denmark Rd, Chorlton On Medlock , Manchester, and John had no occupation stated.
Soon after John joined his brother Harry in Wales, and according to his obituary he also entered the employment of Messrs Davies and Izzard, owners of a local Newtown Brewery, and began to learn the ropes along side his brother.
In 1883 John Griffith Oakley married Sarah Elizabeth Williams in Newtown.Harry emigrated to Australia in 1887, but John and Sarah remained in Newtown for the rest of their lives.
Sarah Elizabeth Williams Oakley died in 1913, in Newtown, aged 49 years. She and John had no children, and John lived on in Newtown alone for another eighteen years.
One of Harry Oakley's friends in Newtown,Mr F. Bennett Lloyd, sent him an obituary for John that appeared in the local paper, and described his poor but respectful funeral. Both the obituary and the letter will appear in a future blog.
Posted by Sherro46 at 9:49 PM