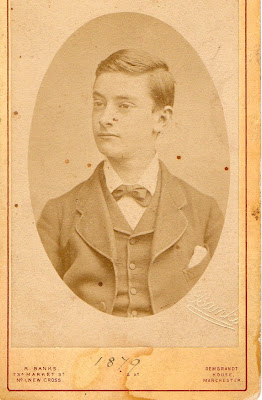 Above: Harry Meabry Oakley, taken in Manchester in August of 1879, aged sixteen years.

My maternal great-grandfather, Harry Meabry Oakley, was born on New Years Day, 1863, at Shooters Hill, Clive, Shropshire. He was the second of four children born to Edwin Thomas Oakley and Jane Elizabeth Oakley, who were second cousins. His unusual middle name of 'Meabry' was given in honour of his paternal grandmother, Jane Meabry.
Harry's early childhood was spent at Shooters Hill with his elder brother John and his younger sister Amy, who was known as 'Jean'.Towards the end of the 1860s his father Edwin moved the family to Liverpool for business reasons.The family were living at 131 Islington, Liverpool, in December of 1868 when Harry's younger brother, three month old Edwin Burlton Oakley, died of convulsions. In October of 1869 Edwin Oakley was declared bankrupt, and his address was given as Magdala Street, Smithdown Road, Liverpool.
The 1870s was a very turbulent time for Harry Oakley. His beloved mother, Jane Elizabeth Oakley, contracted ovarian cancer, and died in October 1871, aged only 33 years.Harry was only eight years old at the time, and as an old man would tell his sons the tale of how his father threw himself upon his wife's grave at the cemetery, weeping, and then married soon after. He was obviously still very bitter over his father's remarriage, even after many years had passed, but the story was exaggerated by either Harry himself or his sons in the retelling. Edwin Oakley did indeed remarry, but not until 1874, three years after Jane's death.
The provision of a stepmother for John, Harry and Jean came in the form of 25 year old Elizabeth Jane Turner from Moss Side in Manchester. I don't think that Harry resented Elizabeth herself, rather than the very act of his father remarrying at all. The was certainly a rift between Harry and his father that I don't think was ever healed.Harry carried with him for years a letter written to him by his mother when he was a very small child( which has been reproduced in a previous blog entry), but there has never been any evidence of any correspendence written by his father after Harry moved to Wales and then Australia.A small birthday book called 'A Chaplet of Flowers' was given to Harry by his sister Jean in January 1877, when he was 14.It contains very few entries, but does contain the following:
January 25: Mr. Turner died 1877
January 27: Buried Mr. Turner at Brooklands.
March 13: Amy J. Oakley
September 11: Albert E. Oakley born 1875
October 8: the letter 'J' was written- this is the birthday of Edwin's elder brother John Oakley.
October 20: Mrs Turner born 1818 Oct 20th.
October 30: Mrs Oakley born October 30th, 1851.

Harry added the birth dates of his wife and two sons when he started a family in Australia, but the above entries are the only ones he wrote in England. Notably absent is any mention of his father. The fact that he included Mr and Mrs Turner, the parents of his step-mother, and his step mother herself( although he did refer to her as 'Mrs Oakley!), but not Edwin tells us that his animosity lay primarily with his father.
Posted by Sherro46 at 9:17 PM