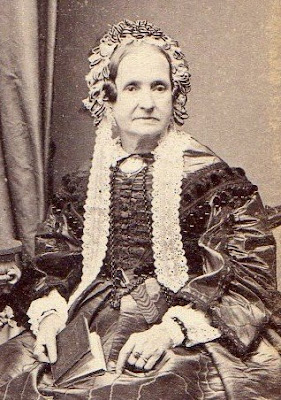 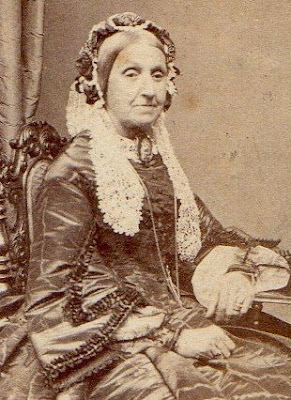 The above two photographs are in the album that Amy Jane Oakley brought out with her to Australia when she emigrated from England in 1887. The bottom photo is on a page with the photo which is marked "Grandpapa" on the reverse, and which has been positively identified as John Bourne Oakley. I believe the top photo may be John Bourne Oakley's wife, Ellen Lewis Oakley. Both of the above photographs would have been taken in the 1860s, so Ellen would have been in her fifties. I would guess that the women in both photos were older, but I am a particularly terrible judge of age. Perhaps the ladies are two of Ellen Lewis Oakley's elder sisters, Elizabeth and Mary who also lived in English Frankton? Feasible, perhaps, but I think that I can spy a ring on the wedding fingers of both women, and Ellen's sisters were both spinsters.
I have just had a thought re. the suspected wedding rings...the lady on the same page as John Bourne Oakley may be his wife Ellen Eliza Lewis Oakley, and the other woman may very well be John Bourne's aunt, Jane Burlton Griiffith of Shooters Hill, who I believe may have helped to raise him when he was orphaned at the age of nine. Jane died in 1861, so if the photo was taken after this date it rules her out as a candidate.
Posted by Sherro46 at 5:26 AM