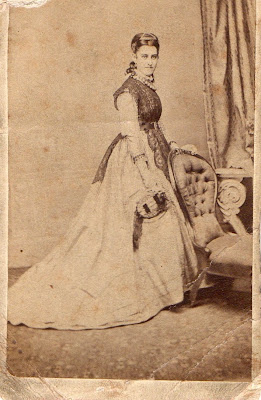 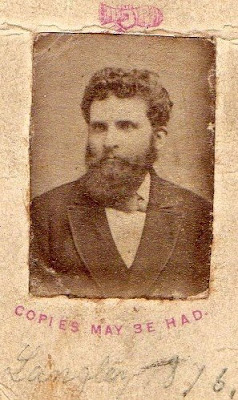 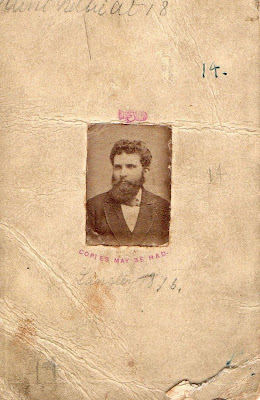 Here remains the one final mystery about Margaret Ellen Oakley...assuming that the photo of the woman above is of Margaret Oakley ( of which I am 99.9 % certain), who is the man in the tiny photograph cut out and pasted onto the back of said photo?
The top photo above is the photo that appears in Amy Jane Oakley's album. The next two photos show what is on the reverse of the top photo..."Aunt Nellie at 18", and a photo of a bearded man with 'Langley 1876' written underneath.
Who was Langley? Was Langley his first name or surname? Could he have been the father of Margaret's baby? This is so frustrating!!!!
Of course, I've done some poking around in various records for evidence of Langley's identity, but without knowledge of whether we are dealing with a first or last name it is nigh impossible to even come up with a list of candidates for Langley's identity.
The 1881 U.K census has 14 men whose first name was 'Langley' who were born in the period 1841-1851. One of them, Langley Thompson, was born in Liverpool in c. 1847, so he was about the same age as Margaret Oakley. In 1881 and 1901 he was living in Liscard, Cheshire, which coincidentally is also where Deborah Potts, the carer of Polly Oakley in the 1881 census, was located in the census returns of 1891 and 1901.
Langley Thompson had married Lydia Cook in 1875, at Plympton, Cornwall. He has born in 1846, the son of Samuel Vallis Thompson and Georgiana Langley.Langley and Lydia had two daughters- Georgiana born c. 1877 in Liverpool, and Frances in c. 1878. It's ridiculous to go chasing a person who is most likely nothing to do with Margaret Oakley, but desperate times call for desperate measures! I have ordered the birth certificate of Polly Oakley who was born in Liverpool in 1878, so we shall see. I don't have high hopes that she will be Margaret's child, however...the name "Polly" is just too out of character for any of the Oakley family to use for a child's 'real' name, as opposed to a nickname derivative of 'Mary'.
Posted by Sherro46 at 5:59 AM