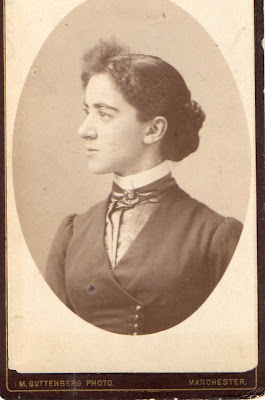 Amy Jane Oakley was born on March 13, 1864, the third child and first daughter born to Edwin Thomas Oakley and his wife Jane Elizabeth Oakley. She was born at Shooters Hill, Clive, Salop, and although was named and baptised 'Amy Jane', she was known all of her life as 'Jean'.
Jean's first few years were spent in an idyllic childhood at Shooters Hill, a beautiful Georgian house situated not far from Clive in Shropshire, with elder brothers John and Harry.
Money would always prove to be a problem for her father Edwin Oakley, and by 1868 the family were in Liverpool when he had set up another business venture.They were living at 131 Islington, Liverpool, when fourth Oakley child Edwin Burlton Oakley was born. Sadly, he died in December of the same year, aged only three months.
Jean was only seven years old when her mother Jane died of ovarian cancer in 1871. Her mother's only sibling, younger sister Margaret Ellen Oakley, had often resided with her sister's family, and most likely continued to live with them to help with the children after Jane's death.
In August of 1874 Edwin married again, providing ten year old Jean and her elder brothers with a stepmother. Elizabeth Jane Turner was born in Machester, and one of three daughters of John and Elizabeth Turner.She gave her husband a further three children- Albert in 1875; Mabel in 1882 and Percy in 1887.
Amy Jane Oakley was very talented musically, and despite her family continually riding the waves of financial insecurity over the years, she was still given the opportunity to study at the Leipzig Conservatorium of Music in Germany in the mid-1880s.
The Leipzig Conservatorium had been established in 1842 by Mendelssohn, and it drew students of music from all over the world, both male and female.The entrance requirements were the same for both sexes,but males were required to take a three year course in theory, whilst women took a two year course "especially organised for their requirements".
I have a photograph album belonging to Amy Jane Oakley, and in it are several photos of fellow students at the Conservatorium, as well as two older people.Unfortunately there is not one of Jean herself whilst at Leipzig, but some of the others are dated 1885, so we know that she attended then- probably from 1883-4 to 1885, when she was aged 20-21.
I will pause in Jean's story for a moment and post the photos of her friends in Leipzig.
Posted by Sherro46 at 9:56 PM