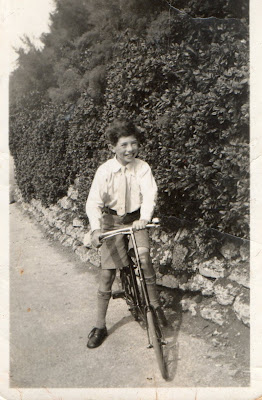 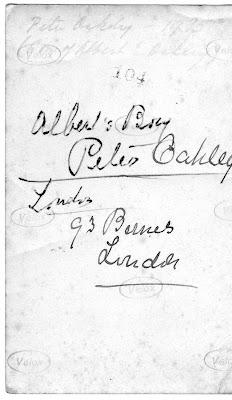 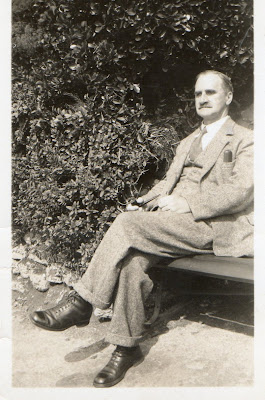 Albert Edward Oakley was born on September 11, 1875, the first child of Edwin Oakley's second marriage.His mother was Elizabeth Jane Turner who had married his father the previous August.
I wish I knew more about Albert Oakley and the other two children born of Edwin's second marriage. Harry Oakley, Edwin's second child who emigrated to Australia and lost contact-quite deliberately, I feel- with his family in England, told his sons very little about his half-siblings.
I have a little birthday book called 'A Chaplet of Flowers' that was given to Harry on his 14th birthday by his sister Amy Jane. In it are very few names, but Albert E. Oakley is one, which is how I obtained Albert's date of birth.
The above photo of Albert has written on the back "Albert- step brother London". It was given to me by Harry's son Gordon Oakley, and with it was a photograph of a beautiful smiling boy on a bike taken in the same location as the photo of Albert.It is inscribed on the reverse "Peter Oakley, Albert's boy, 1935". So, an attempt at keeping the family together by correspondence must have been made at some time during the 1900s.
I have traced Albert through the census returns 1881 through to 1911. The task was made easy by the fact that he was living at home with his parents for all four census returns, as were his two siblings:
1881: 57 Denmark Street,Chorlton On Medlock
Albert E. Oakley/son/ aged 5/ born Manchester

This shows that Albert decided rather late in life to get married. I don't know when and to whom, or whether he and his wife had any other children besides Peter. I have found what could prove to be a good lead on Albert's marriage...the N.A.A has a divorce court file for a 1924 divorce case between Albert Edward Oakley and his wife Victoria Isabella Oakley. Albert is the appellant petitioning for the divorce, his wife Victoria is the respondent and a man named Arthur George Wright is named as the co-respondent.Ancestry.com .au gives two more interesting pieces of information: in 1912 Alfred E. Oakley married Victoria I. Parker in the Richmond, Surrey, district (where our Albert lived with his parents in the 1911 census), and in 1925, the year after the divorce petition, there was another marriage in Richmond, Surrey, of Albert E. Oakley to Florence W. Howes. It all ties in, but of course must be proved before a 'definite' can be applied.
If any descendants of Peter or Albert Oakley find this blog, I would just love them to make contact with me and reunite the Oakleys again after so many years.
STOP PRESS: It is now May 15, 2009, and I have just this moment located evidence that it is indeed our Albert Oakley involved in the divorce case with Victoria Isabella Parker, and that he did marry Florence Howes in 1925, and that they DID have a son named Peter in 1926 at Richmond. There was no issue from Albert's first marriage, and I can't locate any further children from his second, but I have only been searching for ten minutes! I'm off now to do some more scouting around.
Posted by Sherro46 at 3:53 AM