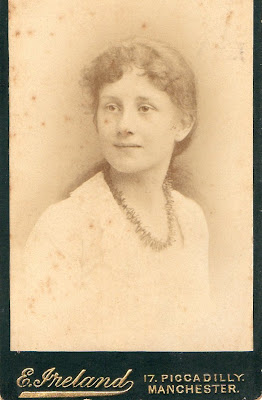 Mabel Oakley was born in early 1882 in the Chorlton district of Manchester, the sixth child born to Edwin Oakley and the second child born of his second marriage to Elizabeth Turner.
The above photograph was in the old album belonging to Amy Jane Oakley. It has nothing written on the reverse, but is supposed to be a photo of Amy's half sister, Mabel Oakley. I have no idea if it is a photo of Mabel- the location is correct, and the period of the photo seems to be consistent of the age Mabel would have been. My great-Uncle Gordon Oakley gave me his aunt Jean's album in the 1990s, and had slipped in pieces of paper with identities of the people when known. All of these people would never have been personally met by Gordon, so I don't know where he obtained his information and just how correct that information was.I will tentatively leave the identity of this photo as Mabel Oakley until hopefully one day someone can verify or otherwise the girl's name.
I have researched the photographer 'E.Ireland", and he moved his location around between census returns.Edward Ireland was a photographer in the Manchester district for over twenty years, assisted by his daughter Elizabeth and sons Charles and Frank as they became old enough to assist him.
Mabel Oakley can be traced through the English census returns as follows:

I have no evidence of Mabel Oakley ever having been married. There is a shipping record on Ancestry.com that shows Mabel had sailed on the ship 'Rawalpindi' in 1928 from Japan to London.Her details were:
"Mabel Oakley of 13 Park Road, Richmond, Surrey, home duties, aged 46. Landed London 24 August 1928, port of departure Yokoham, Japan."
So, if she married, it must have been after this date.
Posted by Sherro46 at 7:02 AM