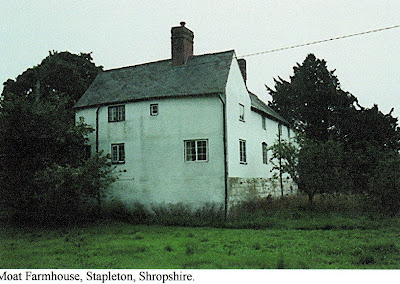 Above: A part of Moat farmhouse, Stapleton, where the Oakleys resided for several generations.

John Oakley was my great-great-great-great grandfather.He was baptised on March 21, 1771, at Stapleton, the fourth child and third son born to Richard Oakley and Margaret Meyrick.
Although he grew up at Moat Farm in Stapleton, John's future was in the nearby city of Shrewsbury. He established himself there as a very successful grocer, situated in the Wyle Cop area where there is still a street named after him to this day.
The entry referring to the Oakley family from Burke's Peerage refers to this John Oakley as being "Of the Round House, Church Pulverbach". As yet I have found no information pertaining to 'the Round House', but will certainly keep on searching as it sounds fascinating.
Twenty five year old John Oakley married Catherine Hewitt on August 18, 1796, at Saint Julians Church, Shrewsbury. Catherine's heritage has been difficult to trace.I think this is because the IGI only has records for the parish of Saint Julians, Shrewsbury for the periods 1559-1711 and 1801-1872I...the period that I am interested in is not covered online. I cannot locate any Hewitt births that match up with her or possible siblings, but through downloading the will of Alexander Hewitt, gentleman, of Shrewsbury, who I believe to be her Uncle,I have formed a tentative family tree for her.
Alexander Hewitt mentions the following people in his will:

WILL OF ALEXANDER HEWITT.

From this will we can construct a rough Hewitt family tree:
Alexander Hewitt (of the will above) was born c. 1717, parents unknown. I found reference to a Thomas Hewitt, grocer, of Shrewsbury, who was the son of Barnabas Hewitt/Huitt of Stone, Staffordshire. Barnabas Hewitt was a corvisor (shoemaker), who apprenticed his son to Mr. John Jennings, grocer, of Shrewsbury. On September 27, 1710, Thomas Hewitt purchased the Freedom of the Town for £5, at which time he had no issue. He was bailiff of the Grammar School from 1713-1717. His bond for £600 bears the date May 23, 1713.There is record of a Thomas Hewitt being buried at St. Chads, Shrewsbury, in 1725.
This Thomas Hewitt may very well have been the father of Alexander Hewitt and his siblings-more sleuthing is required to check it out.
Alexander Hewitt married Ann Harewell on 30 OCT 1752, at Holy Cross And Saint Giles, Shrewsbury, Shropshire.As far as I can tell from his will, there were no surviving children from the marriage at the time that his will was written in 1776
On September 29, 1773, Ann Hewitt, wife of Alexander, was buried at St. Chad, Shrewsbury.
On September 28, 1778, Mr. Alexander Hewitt, aged 61,was at buried St. Chad, Shrewsbury.
Alexander's siblings as given in his will were:
Thomas Hewitt: had sons John, Alexander, Thomas and James.
Abigail Hewitt: married Mr. Whittall. At least one child, Frances.
John Hewitt: farmer of Chester. At least two sons, John and James.
Sarah Hewitt: married Roger Yeomans on July 7, 1743, at Holy Cross and St. Giles, Shrewsbury. She had at least three children- Roger, John and Sarah.
James Hewitt: born c. 1725.This is the fellow who I think may be the father of my g-g-g-g grandmother Catherine Hewitt.In his brother Alexander's will there are named five children as issue of James- James, John, Edward, Catherine and Mary.
In the burial records of Saint Julians, Shrewsbury, we find the following Hewitt burials:
John Hewitt: son of James and Elizabeth Hewitt, 1765, infant.
Elizabeth Hewitt: daughter of James and Elizabeth, 1767.
Edward Hewitt: their son 1767, infant.
Mary Hewitt: their daughter 1770, infant.
James Hewitt Senior: died 1774 aged 49.
Elizabeth Hewitt: died 1814 aged 82 ( therefore born c. 1732)

From the National Archives comes another reference to James Hewitt of St. Julians, Shrewsbury:
"Deed 3 February, 1777
Lease for a year (part of a conveyance)
1. Rowland Wingfield of Abbey Foregate, Shrewsbury, Esq.
2. John Lloyd of Shrewsbury, Cheese factor
John Ashby of Shrewsbury, Esq.
Piece of land called the Fryars alias the Fryars Field (late John Cund, then Dudley Ackland, Esq., now John Lloyd). Piece of land called the Slang with the garden belonging being part of the Fryars (now or late John Bishop); 4 pieces of land or garden ground one of which was heretofore a timber yard, being other part of the Friars (heretofore in the several tenures of David Pugh, James Hewitt, Jonathan Scoltock and Mr. Edward Pearce, now or late Mr. de Courcy, Mr. Kirby, Mr. Hughes, Mr. Lee, Mr. Bishop, Mr. Yeomans, Dudley Ackland, Mr. Harrison, Mr. Hill, Mr. Cross, Mr. Thomas and Mr. Jones) - all in the parish of St. Julian's Shrewsbury. To hold to Lloyd and Ashby in order to accept a release of the reversion.
Signed: Rowland Wingfield."


Catherine Hewitt Oakley and her husband John Oakley had a family of twelve children, some of whom died in infancy:

These children will be discussed in greater detail in the next blog.

John Oakley the grocer died in 1819 at Wyle Cop, Shrewsbury, at the age of 47. He was buried on April 23, 1819.
I have not found a definitive death date for his wife Catherine Hewitt Oakley, but I have ordered the death certificate of a Catherine Oakley died Shrewsbury in 1840 that seems promising...I'll keep you posted.
Posted by Sherro46 at 5:15 AM