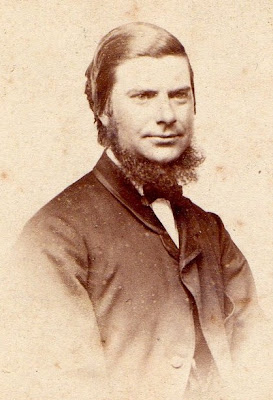 My Great-great grandfather Edwin Thomas Oakley (pictured above in c. 1866) was the fourth child and third son born to John Oakley and Jane Meabry. He was born in Parliament Street, Westminster,and baptised at St. Margaret's Church, Westminster, on April 2, 1837. On his baptismal record, his father John's occupation was given as 'tea dealer'.
Edwin's earliest years were spent around Parliament Street, Westminster, where his father ran a successful grocers shop, and then from c. 1840 onwards he lived with his family in the upper private apartments of Fortnum, Mason & Co at 182-183 Piccadilly, London.From 1838 until his death in 1861, John Oakley was a partner in the Fortnum, Mason & Co business.
Like his elder brothers John and William, Edwin was sent away to complete his schooling, but despite me having spent many (unsuccessful!) years trying to locate him in the 1851 census, I don't know where he was educated! His brothers were at Bedford House School in Brixton, Surrey, at the time of the 1841 census, but Edwin wasn't there at the time of the 1851 return...it is as though he didn't even exist!
During his adult years, Edwin tried his hand at many ventures, the majority of which, it must be said, were unsuccessful.While in his early twenties, he established himself as a merchant in Norwich, Norfolk, in late 1850s, forming a partnership with John Norgate as Spirit and Wine Importers. This partnership came to an end in April of 1858, as reported in the London Gazette on April 30, 1858:
"Take notice that the partnership subsisting between us the undersigned John Norgate and Edwin Thomas Oakley, of Norwich, as Wine and Spirit Importers, and Ale and Porter Agents or otherwise, has been dissolved by mutual consent. dated 28 April, 1858. John Norgate. Edwin T. Oakley."
The parting of ways by the two business partners may not have gone smoothly, as in the 'Solicitors' Journal & Reporter' of 1858 there is found: "Court Papers, Easter Term, 1858... In the matter of Arbitration between John Norgate, and Edwin Thomas Oakley, and John Oakley."
Edwin soon after popped up in Liverpool, where an advertisement appeared in the Liverpool Mercury in November 1858 for " Edwin T. Oakley,Wine and Spirit Importer, 23 Brunswick Street, Liverpool."
It was in November of 1858 that Edwin Thomas Oakley married his first wife, Jane Elizabeth Oakley. Edwin and Jane were second cousins...they shared paternal great-grandparents in Richard Oakley and Margaret Meyrick; their grandparents were brothers John Oakley and Timothy Oakley; and their parents were first cousins John Oakley and John Bourn Oakley. I will deal with the family of Jane Elizabeth Oakley in more detail in another blog.
Edwin was 23 years old when he married 21 year old Jane Elizabeth at St. Mary's Church, Shrewsbury, on November 3, 1858.The groom's usual place of residence was Birkenhead, and the bride's Shooters Hill, Clive, Shropshire.Witnesses to the event were Edwin's brother William Alfred Oakley and two women whose relationship with the couple is unknown...Sarah Anne Brookes and Jane Birch.
The marriage was reported in several newspapers of the time, including The London Times,The Gentleman's Magazine, and The Morning Chronicle.The report in the latter publication on November 8, 1858, read as follows:
" Marriage. On the 3rd inst. at St. Mary's Church, Shrewsbury, Edwin T. Oakley, of Liverpool, son of John Oakley Esq of Piccadilly and Golders Green, Hendon, to Jane Elizabeth, eldest daughter of John B. Oakley Esq of English Frankton Shropshire."

"November 3, at St. Mary's, Shropshire, by the Rev. T.H. Lloyd,M.A.,Mr. Edwin T. Oakley of Brunswick-street in this town, son f J. Oakley Esq of Piccadilly, London, and Golders Green, Hendon, to Jane Elizabeth, eldest daughter of John B. Oakley, Esq, of Frankton, and niece of Mr. Griffith of Shooters-hill, Shropshire."

The couple initially resided in Birkenhead where, at their home at 7 Hamilton Street, their first child John Griffith Oakley was born on October 8, 1859. When his father registered the baby's birth, he nominated his own occupation as 'gentleman'...I get the feeling after many years of pondering the nature of Edwin Thomas Oakley that he would have dearly loved to have become the typical English country gentleman, never having to work to obtain the money to achieve a lavish lifestyle. I think he did achieve this life style for a short period in the 1860s when his wife Jane inherited the use of the beautiful Shooters Hill house near Clive in Shropshire. Shooters Hill was (and still is!) a magnificent Georgian residence built by the husband of Jane's maternal great aunt, Jane Burlton Griffith.
Jane Griffith and her husband John were childless, and when her sister Elizabeth Oakley and her husband Timothy both died c. 1820, leaving a small son as an orphan, I have suspect that Jane Griffith would have had some part in the upbringing of her young nephew, John Bourne Oakley.
John Griffith died in 1849, and in the 1851 census Jane was living at Shooters Hill with two servants, Martha Davis and Elizabeth Brookes.At the time of her marriage in 1858, Jane Elizabeth Oakley was residing at Shooters Hill with her great-aunt Jane, probably in the capacity as a companion. When Jane Griffith died in January of 1861 she left a long and detailed will which basically had only four beneficiaries- Jane Elizabeth Oakley and her younger sister Margaret Ellen, and their parents John Bourne Oakley and Ellen Lewis Oakley.Provision was also made for John Griffith Oakley, who at that time was the only child born to Jane Elizabeth Oakley.
Posted by Sherro46 at 5:42 PM