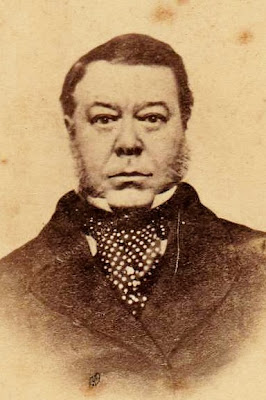 My great-great-great grandfather, John Bourne Oakley(pictured above) was born at Pulverbatch, Shropshire, in 1812, the only living child of Timothy Oakley and Elizabeth Burlton.He was baptised at Pulverbatch on February 23, 1813.
At some stage during his early childhood,John and his parents moved north to English Frankton where his mother was born and where her family still resided. His father purchased farm land there, and for several years all went well.
Then, in 1818, a run of tragedies started that would eventually leave John an orphan without even grandparents to take him in.
First to be buried in the graveyard of Saint Simon and Saint Jude at Cockshutt was John Bourne Oakley's uncle, John Burlton, at the age of 29. His infant daughter Jane Elizabeth joined him five months later, followed by John Whettall Oakley, John Bourne's grandfather,the next March. Grandmother Elizabeth Burlton was buried with her husband only five weeks later,in April 1819.
The Oakley family of English Frankton was to have two years without loss, and then within the space of eight months both Timothy Oakley and his wife Elizabeth died- Timothy on July 4, 1821, and Elizabeth on March 16, 1822.
Both made monetary provisions for their only child in their wills, and Elizabeth named her cousin, Thomas Maddox, and brother-in-law John Griffith, as guardians of John Bourne Oakley during his minority.
John Oakley was about nine years old when he lost his parents.He had no grandparents alive to care for him...his Burlton grandparents John and Elizabeth had died in 1819, and his paternal Oakley grandparents Richard Oakley and Margaret Meyrick Oakley had died in 1786 and 1817 respectively.
Of his mother's siblings, John Bourne Oakley had only one living Aunt, Jane Burlton Griffith, who lived at Shooters Hill near Wem with her husband John Griffith. They had no children, so they very well may have taken in their young nephew, especially as John Griffith had been nominated as one of his guardians.
Amongst his father Timothy's siblings, John had two living uncles, Thomas and William, and a childless aunt, Margaret Oakley Jandrell.Thomas Oakley married Elizabeth Broome of Church Stretton. They farmed at Hope Bowdler, and had no children, nor did William Oakley who lived at Church Pulverbatch.
Margaret Jandrell left twenty pounds to John Bourne Oakley in her will when she died in 1835.His other aunt, Jane Burlton Griffith, also left him a bequest in her will when she died in 1861, although her husband, and John's guardian, did not mention him in his will made in 1850.
I don't think that John Bourne Oakley ever had to work for an income...in census returns from 1841 to 1871, his occupation was described as "Yeoman"(1841), "Annuitant" (1851), "Retired farmer" (1861) and "Annuitant" again in 1871.

John Bourne Oakley was in his early to mid twenties when he married a girl from Petton, Shropshire. Eleanor,or Ellen, Lewis was the daughter of John and Eleanor/Ellen/Helen Lewis. 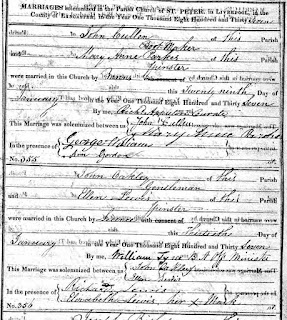 I will pause in John Bourne Oakley's story for a moment to go off on a small tangent about my Lewis ancestors.
Posted by Sherro46 at 11:15 PM