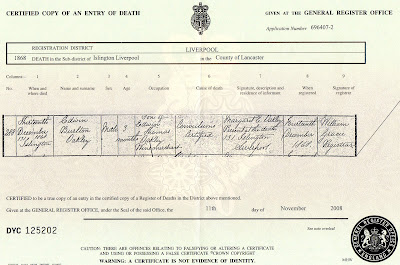 Little Edwin Burlton Oakley spent only three months in the world. He was the fourth and final child born to Edwin Thomas and his wife Jane Elizabeth Oakley, and was born in the latter part of 1868. He was named for his father Edwin and his maternal great-grandmother Elizabeth Burlton.
As can be seen from the above death certificate, baby Edwin died of convulsions aged three months, on December 13, 1868. His mother had no more children..she died aged 33 in 1871.
Posted by Sherro46 at 3:34 AM