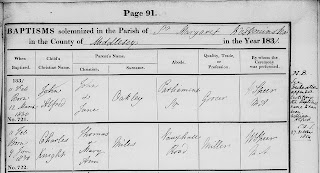 Above: The baptism record of the child William Oakley reveals that a mistake was made at the time that the baptism was entered into the register. He was recorded as "John Alfred" instead of "William Alfred". A notation states that the mistake was rectified on October 27, 1854. 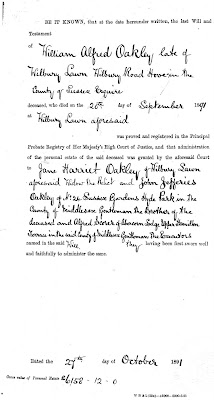 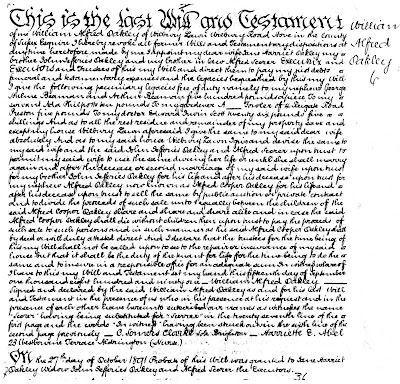 William Alfred Oakley was born on March 12, 1830, the second child and son of grocer John Oakley and his wife Jane Meabry. His elder brother, John Jeffryes Oakley, had been born the preceding year, at St. Pauls Covent Garden which was near their Henrietta Street home and grocers shop. William was baptised at St Margaret's, Westminster, on February 11, 1831. By this time his father had opened a grocery store in Parliament Street, Westminster, and the family resided there for the duration of the 1830s.

William has proven to be a bit of a mystery man. His existence was only discovered a few years ago when his name appeared as a witness on the marriage certificate of my great-great grandparents Edwin Thomas Oakley and Jane Elizabeth Oakley in 1858.

Because 13 year old John Jeffryes and 11 year old William were missing from the family home in the 1841 census, and 16 year old Edwin Thomas from the 1851 census, it was probable that they were schooled away from home at a public school. Sure enough, in 1841 I located John Jeffrys and his brother William Alfred at Bedford House School in North Brixton, Lambeth, Surrey. John’s age was given as 12, and William’s as 11.

In 1851 the boys were residing with their family in private rooms above Fortnum, Mason & Co at 182-183 Piccadilly. Their father John was one of the partners in the Fortnum & Mason business, and as the eldest son John Jefryes was groomed for the business. William had to forge his own place in life, and he did this in the areas of auctioneering and real estate very successfully. Many advertisements appear in The London Times newspaper that were placed by William to advertise properties for sale and rent. He operated his business from Number 8 Carlton Chambers, regent St, London. The first advertisements placed by William in The Times occurred in 1852, and the last located in July 1864.

In the 1861 census, 31 year old William Oakley was living at the Golders Green country home of his London-based family. His father John had died at the start of 1861, and eldest son John Jeffryes Oakley remained at the London home address to maintain business ties there. Brother Edwin had married his second cousin Jane Elizabeth Oakley and the elder of his two sisters, Jane Elizabeth had married surgeon George Hulme Beaman and was living in London. This left the unmarried William as man of the house in his mother’s family, although he was also living at his London address of Carlton Chambers, Regent Street.

William Alfred Oakley married Jane Harriet Sharshaw on April 2, 1862 at St. Mary's, West Brompton. She was from Stratford Upon Avon, in Warwickshire. In the 1861 census, 25 year old Jane had been staying at the home of her aunt and uncle, Alfred and Jane Taylor of Madeley Villas, Victoria Road, St. Mary Abbotts, Kensington.

The Sharshaw name is a very rare one-in fact, members seem to be as scarce as hens' teeth. Jane Harriet was the daughter of Thomas Sharshaw the Younger, and his wife Harriett(maiden name probably Taylor). Thomas and brothers William and George Sharshaw were the sons of Thomas Sharshaw the Elder (b c. 1782) and his wife Mary Ann Hanslow. Thomas was a successful butcher in Stratford On Avon in Warwickshire. He was the son of William Sharshaw (c. 1749-1832), and had siblings including Joseph, John and William.

William Oakley proved very elusive in the 1871 census, but I finally found him holidaying in Brighton with his wife and mother. They had apartments in Bella Rue Mansion, 41 Kings Rd, Brighton, where Jane Oakley was head and sharing her residence with five others. The enumerator must have been confused by the gathering, or else the person giving him the information wasn’t very helpful, because quite a few mistakes were made. For example, Jane H. Oakley was Jane’s daughter-in-law, not daughter as described. Jane’s son William was merely described as a ‘visitor’, and Jane’s niece Jane Keysell was written as Jane Keynett, a daughter. Still, I finally sorted them all out, and it was certainly a relief to find William in any guise. Aged 51, William pops up again in the 1881 census, living with his wife Jane in Hove, Brighton. The couple were living in Wilbury Street, Hove, Brighton, with William’s occupation given as ‘gentleman’. They also had two servants living in, 16 year old housemaid Elizabeth Weston and 31 year old cook Caroline Penith.

A decade down the track finds the couple still living at 44 Wilbury Road. William is noted as ‘living on his own means’, which must have remained substantial as they have continued to employ two live-in domestic helpers. Elizabeth and Caroline have moved on, and been replaced by 22 year old Ada L. Philpot and 28 year old cook Harriet Morley.

William and Jane Oakley were not to be blessed with children, and when William died on September 20, 1891, his will left most of his estate to his wife, with several other specific bequests.Included amongst his beneficiaries were "My nephews George Hulm Beaman and Arthur Beaman"; "m servant Ada Philpott"; "My gardener A. Fowler of Reigate Road, Preston"; "My doctor Edward Irwin Scott"; and "My nephew Alfred Oakley now known as Alfred Cooper Oakley".
His lovely home, Wilbury Lawn, at Hove, was left to his wife until she died or remarried. It then passed to his brother John Jeffryes until he died, and then on to his son Alfred Cooper Oakley. After Alfred's death, it was to be sold and the proceeds distributed as to instructions in Alfred's will.
None of this came to pass, as Jane Harriet Oakley never remarried and outlived both her brother-in-law John and her nephew Alfred.When she died in 1907, the house was sold to Sir Sidney Wishart, a Lloyds of London insurance broker, who in the 1911 census was living at Wilbury Lawn with his wife, Alice Maud, little daughters Lorna and Stella, son Ernest, two female visitors and one male,a governess and assorted servants.
When Jane Harriet Oakley died on January 29,1907, she left an estate worth over twenty two thousand pounds.The "Times" newspaper reported that after making a number of private bequests, Mrs Oakley left her pictures in the dining room of Wilbury Lawn to the Mayor and Corporation of Brighton, and her statue of Dante and her oak writing table to the Dante Society. The residue of her estate was left to the Sussex County Hospital, an amount which was expected to exceed more than fifteen thousand pounds.

For many years after the deaths of her husband and mother (William in 1891 and her mother Harriet Clarke in 1897), Jane Oakley would always put a memorial notice in the London Times to mark the anniversary of their deaths. It was usually along the lines of:
" In loving remembrance of my beloved mother, Harriet Clarke (late of Worcestershire) who died 26th January, 1897, at Wilbury Lawn, West Brighton, regretted by many." and "In Memorium. William Alfred Oakley-In loving remembrance of my dear husband who died in perfect faith and peace, September 20th, 1891, at Wilbury Lawn, West Brighton."

It is sad to see that Jane Oakley had no family to remember the anniversaries of her death.

The Oakley home, Wilbury Lawn, must have been a very impressive residence.In July of 1947 an advertisement in the Times stated the following:
"The Gentleman's Residence, WILBURY LAWN, 44 Wilbury Road, Hove, an imposing and spacious detached house with a large garden and containing lounge hall, dining room, drawing room, billiards room, 15 bed and dressing rooms, 3 bath rooms and excellent domestic offices. With vacant possession."
It was one of the three homes of Col. Sir Sidney Wishart from the time of Jane Oakley's death until his own death in June of 1935. A Sir Frederick and Lady Dutton also left their residence at Birch Hall, Windlesham,in October of 1923 to make Wilbury Lawn their home for six months.
Posted by Sherro46 at 7:03 AM