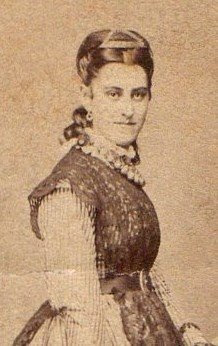 Above: I believe that this may be the only photo of Jane Elizabeth Oakley's only sibling- her sister Margaret Ellen Oakley.The photo comes from an album belonging to Jane Elizabeth's daughter Amy Jane Oakley, and on the back is written "Aunt Nellie at 18". The photo was taken at the studio of J Groom, Shrewsbury, unlike others from the same album of Jane Elizabeth Oakley, her husband Edwin,father John Bourne Oakley and son John Griffith Oakley, who all sat for photographer James Laing of Shrewsbury. Josiah Groom, photographic artist of Shrewsbury, became bankrupt in 1864. He was aged 25 and employed as a photographer and gilt frame maker in the 1861 census, living at Wyle Cop, Shrewsbury.
There are no other contenders for the title of "Aunt Nellie"- Amy's mother had only one sister, and her father had two, Jane and Fanny, neither of whom this woman could be.One of Edwin's uncles, Thomas Oakley, had married a woman called Ellen Meabry, but she was far too old to be the subject of the photo.
Because the mother of Jane Elizabeth and Margaret Ellen Oakley was christened 'Elinor' and known as 'Ellen', as was her own mother, perhaps her little granddaughter Margaret Ellen was known as 'Nellie".
The photo's subject is the right age to be Margaret Ellen Oakley-she was born c. 1846, so to be 18 years old the photo would have been taken c. 1864-65, which is about right.
In addition, there is a strong similarity between Jane Elizabeth Oakley and the woman in the photo above-they could easily be sisters.

Margaret Ellen Oakley was born on July 18, 1846, in the family home at English Frankton, Ellesmere parish, Shropshire. On her birth certificate her parents were noted as being John Bourne Oakley, farmer, and Ellen Eliza Lewis. Baby Margaret was baptised when she was five days old, on 23 July, 1846 , at Cockshutt.

Margaret grew up with her elder sister and parents in the small village of English Frankton, where her father owned land and houses.In the 1851 census she was at home with her parents, aged four, and her sister Jane was away at school in Ellesmere.
By the time of the next census in 1861, Jane had married her cousin Edwin Oakley and was living at "The Grove", Middle, Shropshire. At the time of the census 14 year old Margaret was living with her sister, although on the actual night of the census she was at 'The Grove' without Jane and Edwin- they were away somewhere, and Margaret and her little nephew, John Griffith Oakley, had been left in the care of nurse and cook Jane Lloyd.
In 1871, Margaret was back home living with her parents in English Frankton.Her age was given as 23, but she would have been almost 25.In October of 1871, Margaret lost her only sibling when her sister Jane Elizabeth Oakley died of ovarian cancer, leaving her children motherless. It is possible that initially Margaret helped to care for the children, since she had spent a good deal of time with the family up to that point.
Harry Oakley kept a letter written to him by his aunt Margaret after his mother's death, in which she expresses her excitement over his upcoming visit. She says:
"My darling Harry,
I cannot tell you how we are looking forward to seeing your dear face tomorrow. We shall expect you by dinner time, but I shall not come to meet you, for your Papa said Charles Smith would bring you.
I do so wish dear Jack were coming with you but we shall see him in August I hope.
Give my fond love to him, dear Missie and Papa and tell the latter we hope he will let you stay with us the whole of your holidays, for the country air will do you good, love. We have such a pretty little kitten for you but I have given Nip away, but hope to have a smaller one soon.
With much love to each. Believe me ever, Your loving Auntie, Margaret E. Oakley".

The letter is undated, but must have been written after Jane's death in October 1871 as she is not mentioned in the letter. I imagine that "Missie" is a pet name for Amy Jane, Harry's sister, and 'Dear Jack' is his elder brother John Griffith Oakley.

Margaret's father, John Bourne Oakley, died at his home in English Frankton on August 15, 1873, when Margaret was 27. Her mother Ellen Lewis Oakley was about 61 years old, and presumably she and Margaret remained at English Frankton after the death of John.
For the next five years, up until her death, Margaret Ellen Oakley's life is a mystery.Her death notice appeared in three papers that I located- the Pall Mall Gazette, The Liverpool Mercury and The London Times. All state that she died at the age of 28 years, but she was actually four years older.
I sent away for Margaret's death certificate, curious to ascertain her cause of death was since her sister had also died relatively young. I was amazed, and incredibly saddened, to read that on the tenth of November, 1878, at 59 Berrington Hill,Liverpool, Margaret Ellen Oakley had died of PUERPURAL PERITONITIS of eight days duration.
This condition, of course, was a complication of childbirth, and poor Margaret had ended her first pregnancy with terrible suffering followed by death. It would have been a dreadful manner in which to die. The following exert comes from " The Attempt to Understand Puerperal Fever in the Eighteenth and Early Nineteenth Centuries: The Influence of Inflammation Theory by CHRISTINE HALLETT, PhD:

" Puerperal fever was a devastating disease. It affected women within the first three days after childbirth and progressed rapidly, causing acute symptoms of severe abdominal pain, fever and debility.
The Edinburgh physician William Campbell, in his treatise of 1822, observed that the symptoms of puerperal fever could be complex and difficult to interpret. In the majority of patients the disease appeared on the third day, and commenced with rigor, headache and the “cold fit” followed by extreme heat, perspiration and thirst. Abdominal pain was an almost ubiquitous feature and this began as a mild symptom, becoming increasingly severe over the duration of the disease. This pain—which was accompanied by abdominal distension—was usually located in the hypogastric and iliac regions, and any apparent remission tended to be dangerous, indicating mortification. There was “great derangement of the vascular system”, the pulse rising to as much as 140 beats per minute, and the patient tended to lie on her back and appear listless and indifferent. The tongue was usually white, although it could become dark and furred in the face of impending death. Respiration was difficult due to the abdominal pain and distension, and the patient was prone to nausea and vomiting. The early stages of the disease could be characterized by constipation, which, however, soon gave way to diarrhoea. Urination was usually painful and the urine was “high coloured and turbid”. The production of milk was usually suppressed, but the flow of lochia tended to continue. A minority of sufferers experienced delirium and mania."
'Puerperal Peritonitis' indicates that the infection has spread beyond the uterus to include the surrounding regions within the abdominal cavity.
Surprisingly, Edwin T. Oakley registered his sister-in-law's death:- Informant-"Edwin T. Oakley, brother-in-law present at death, of 82 Dorset Street, Hulme, Manchester."
My mind, full to over-brimming with too many detective novels and family sagas, immediately thought "Ah Ha! Edwin had an affair with his dead wife's younger sister!" Of course, there are absolutely no grounds upon which to base this statement- it is reasonable that Margaret, who had viewed her sister's family as her own second family since she was a young girl, would call upon Edwin either when the problem of her pregnancy surfaced or when she fell so ill after childbirth. It also must be remembered that Edwin Oakley was also her blood kin...they were second cousins as well as related through marriage.
Edwin Oakley had been married to his second wife Elizabeth Turner for four years when Margaret died, and was living in Manchester. The distance between Liverpool and Manchester is about 33 miles (53 km), so Edwin wouldn't have had to travel a great distance to come to Margaret's assistance.
I would love to know where Margaret's mother Ellen Lewis Oakley was at this time. Did she know her daughter was pregnant, or was it kept a secret? Did she ever know what killed her daughter? What was Margaret doing in Liverpool anyway, when her home was in Shropshire, and who was she living with?
A check of the 1881 census to see who was living at 59 Bevington Hill, where Margaret died, was not very helpful. Two branches of the Gibbs family were living there- 29 year old Henry Gibbs (he was actually about 31), a master plasterer, and his wife Lillian and 10 month old son Henry, and the family of 29 year old Gilbert Gibbs, including his wife Mary and five children. No obvious tie-ins with the Oakley family there, and I can't find a directory for Liverpool c. 1878 that may give me a clue as to who else lived at 59 Bevington Hill at the same time as Margaret.
Most important amongst all of the questions arising from Margaret's mystery pregnancy is "What happened to Margaret's baby?" Did the child die along with the mother, or did it live and was relocated to a home with another family?
I looked for Oakley births in Liverpool amongst the BMD index for the December Quarter for 1878, and found only one...a baby girl named Polly Oakley.I checked for her in the 1881 census, and here comes the interesting part...two year old Polly Oakley,born Liverpool, was a 'visitor' in the house of 28 year old James Potts, an Engineer(ship) from Mellor in Derbyshire, and his Irish wife Deborah.They lived at 15 Biskerton St, Toxteth Park, Lancashire.
This suggests the age-old scenario of a motherless baby being placed with a 'wet nurse. I have researched both James Potts and his wife and there is no Oakley connection that I can find.
James Potts was actually born Frederick James Potts in c. 1852,at Mellor, Derbyshire. He married Deborah Hannah Wright in Liverpool in early 1878. Deborah was born c. 1852 in Ireland, the daughter of Henry Wright, a dock hand, and his wife Deborah.
For Deborah to become wet nurse to baby Polly Oakley, she would have had to have lost a baby of her own.The death index shows that a Margaret Potts, aged 1, died in the December 1/4 of 1878 at Liverpool...time, age and place correct, but unless I get the death certificate I will never know.
Deborah and James had no living children- James died in Chorlton, Lancashire, in 1888. In the 1891 census Deborah Potts was a 37 year old widowed housekeeper for the McGhie family of Liscard, Cheshire. In 1901 she was still in Liscard, aged 47, and still working as a housekeeper for George William McGhie.
Posted by Sherro46 at 9:59 PM