Jane Elizabeth Oakley was the first daughter born to John Oakley and his wife, Jane Meabry. Like several of her siblings, Jane’s birth and baptismal details are sadly lacking, but census information provided by census returns 1841-1911 suggest that she was born in c. 1832, in Westminster, London. Her parents were living at 34 Parliament Street, Westminster, at this time, so she was most likely born at this address. 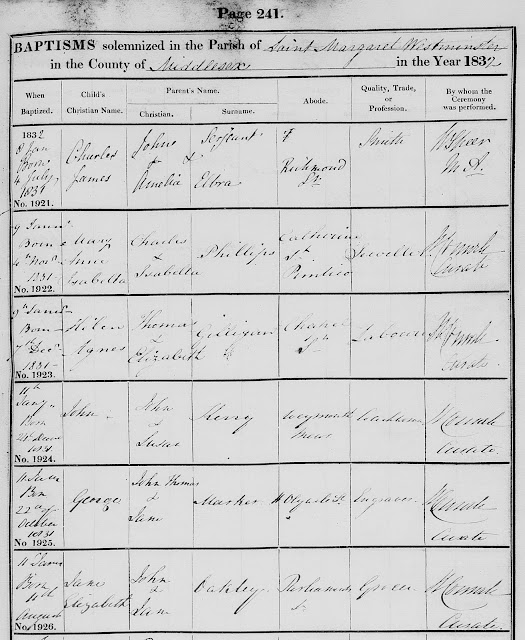 Above: The recently discovered (March 2013) baptism of Jane Elizabeth Oakley reveals that she was born in Parliament Street, Westminster, on August 11, 1831, and baptised at St Margaret's, Westminster, on January 11, 1832.

Jane’s early years were spent in London and Golders Green, a rural settlement not far from the city. The census returns for 1841 and 1851 reveal the following information about Jane and her family:

Towards the end of 1852, aged 22 years, Jane Elizabeth Oakley married surgeon George Hulme Beaman, at Golders Green, Barnet.
George Hulme Beaman was born on February 24, 1825, and baptised at St. Pauls, Covent Garden, Westminster. His parents were surgeon George Beaman and Mary Ann Offley.George was the eldest of the Beaman family, his siblings being:

ARDERN HULME BEAMAN: born December 10, 1828. Baptised August 4, 1829, St. Pauls, Covent-Garden. Married Lydia Miriam Harriet Gompertz, 1856.She was a member of the illustrious Gompertz family of Jewish converts to Anglicanism. Ardern was a Surgeon-General in the Army stationed at Hoshangabad, India. Children Ardern George Hulme, Frank Clement Offaly, Emeric Hulme, Claude and George all born in India. Daughter Violet born c. 1871 in Bedford, England. Frank Beaman became known as the "Blind Judge"...he came to India as as a covenanted member of the Indian Civilm Service in 1879 at the age of 21 aftercompleting undergraduate studies at Queens College, Oxford. Over the course of his Indian judicial career he went blind, but continued to practice with the use of hired readers and learning to take notes in court on a typewriter.
Lydia Gompertz Beaman died in 1879. Her husband Ardern Hulme Beaman died August 24, 1915, Barnstaple, Devon.

HENRIETTA HULME BEAMAN: born June 18, 1831. Married Joseph Henry Robins, 1851.The Londaon Gazette of May 3, 1861, carried the following article:
"Joseph Henry Robins (sued and committed as Joseph Robins) formerly of Hulme-cottage, Hampton Wick, Middlesex, part of the time Silk Tie Manufacturer,carrying on business in copartnership with one John West on at No. 9, Noble-street, Cheapside, London, under the style or firm of J. Weston and Co., and other part of the time out of business or employ, then of Holly-lodge, Bridge Road, Hammersmith, Middlesex, Travelling Agent for a Music Publisher, then of Waterloo-street, Brighton, Sussex, then of Spon-street, Coventry, Warwickshire, then of Register-street and Leith-street, Edinburgh, Scotland, then of No. 36, Byrom-sfreet, Manchester, Lancashire, then of Lancaster-place, Strand, Middlesex, Comedian, and during the above period
staying for short periods at No. 19, Bedford-street,Covent Garden, Henrietta-street, Covent-garden, Southampton-street, Covent-garden, and No. 32, King-street,Covent-garden, all in Middlesex, then of No. 12, Charlwood- place, Belgravia-south, Pimlico, Middlesex; and late of the Rose-hotel, Canterbury, Kent, out of business or employ."
Also in April 1861: Joseph Henry Robins, late of the Rose Hotel, Canterbury,
Kent, Comedian, out of employ.—In the Gaol of Canterbury.
These two articles fascinated me, and I began to delve deeper into the life of Joseph Henry Robins. His story was fantastic- well-to-do young merchant who wins the approval of a surgeon to wed his beloved only daughter, only to heed the call of the spotlight and surrender his livelihood for fulltime acting in the theatre! Henrietta also acted, which would have been considered quite shocking amongst respectable families in those times.I doubt she received much support from her family, as when her husband Joseph fell very ill and couldn't work for three years in the period 1874-1877, Henrietta wrote to The Era, a London theatrical publication, to appeal for financial help to pay their medical bills of just over sixty pounds.Any of her brothers would have been able to come to her aid, but obviously did not.
A book entitled 'Henry Irving's Impressions of America" by Joseph Hatton carried a good story about Joseph Robin's initiation into the theatre:

" 'Do you remember Joe Robins- a nice,genial fellow who played small parts in provinces? Joe Robins was once in the gentleman's furnishing business in London city. I think that he had a wholesale trade, and was doing well.
However, he belonged to one of the semi-Bohemian clubs; associated a great deal with actors and journalists, and, when an amateur performance was organised for some charitable object, Joe was cast for the clown in a burlesque called "Guy Fawkes".
Perhaps he played the part capitally; perhaps his friends were making game of him when they loaded him with praises; perhaps the papers for which his Bohemian associates wrote went rather too far when they asserted that he was the artistic descendant and successor of Grimaldi.
At any rate, Joe believed all that was said to him, and determined to go upon the stage professionally and become a great actor." ( The entire artcile will be reproduced in a future blog entry)
Joseph Henry 'Joe" Robins never recovered from his affliction, and died in August of 1878. His wife Henrietta was left destitute, and was forced to advertise in the newspaper for work in the theatre or as a housekeeper. She would have been about 47 years old at the time, but obviously still not close to her estranged family if she had to beg for assistance in the paper rather than turn to them for help.
The Robins family have been extremely problematic when it comes to finding them in census returns...I haven't found them in any! I finally located Henrietta Robins in the 1891 census, when she was visiting a family at St. Peter, Hereford. She was described as a widow, 59 years old,born in London, and her occupation was "Actress with own Company." The head of the family she was residing with was a 31 year old police constable named Francis Joseph Daniel Smith. His wife was Mary Ann, aged 25, and their daughter Minnie Winifred was 5 months old. I have no idea how and why Henrietta was staying with them- Mary Ann's maiden name was 'Hall' when she married Francis in 1885, so she wasn't Henrietta's daughter. Who knows???
Henrietta Hulme Beaman Robins died on April 18, 1895: from 'The Era'- "Mrs Robins, widow of Joseph Robins, comedian, died April 18, 1895."

The 1851 London Directory showed that George Beaman Snr and his son, George Hulme, both operated from the same premises:

The 1843 London Directory revealed that George Beaman Snr, surgeon, was resident at 32 King Street, Covent Garden, so son joined father in business after he qualified as a surgeon.
The London Gazette of January 6, 1860, carried the folowing notice:
"NOTICE is hereby given, that the Partnership heretofore existing between us the undersigned, George Beaman and George Hulme Beaman. as Surgeons and Apothecaries, and first carried on at No. 32, King-street, Covent Garden, in the county of Middlesex, and afterwards at No. 3, Henrietta-street, Covent-garden aforesaid, determined by mutual consent ou the 1st day of January, I860.
—As witness our hands this 2nd day of January, 1860.
George Beaman, M.D.
George H. Beaman."
In the eleven years of their marriage, Jane bore her husband five children…two daughters and three sons, one of whom died young. 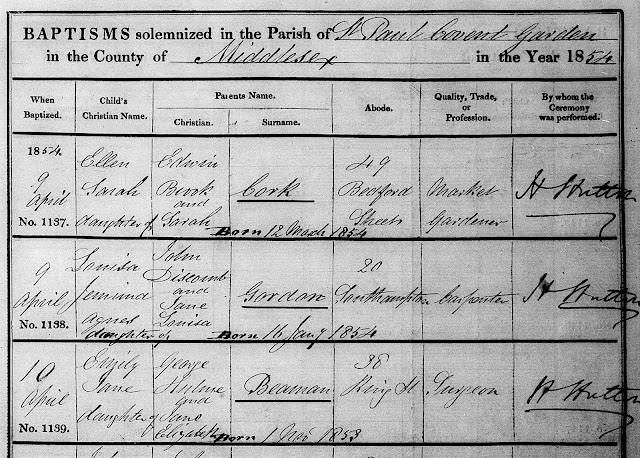 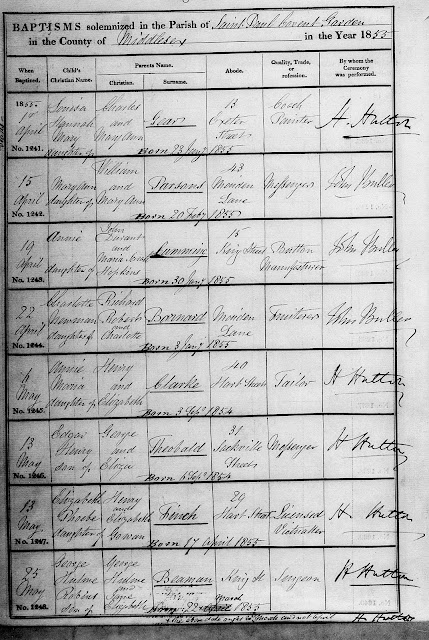 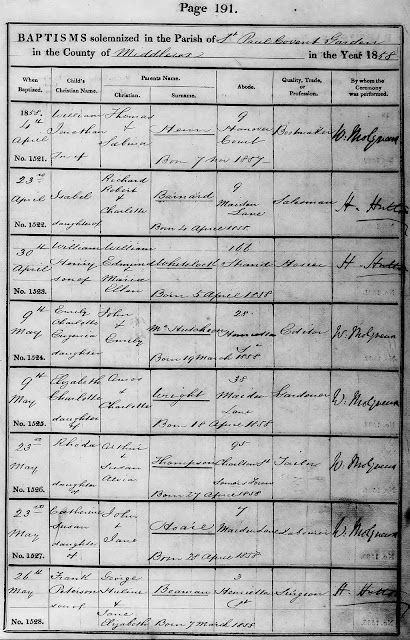 As can been seen from the entry in the burial register above, little Frank Beaman died in February of 1861, aged only 2 years.

In 1863, only months before the death of his father, baby Arthur Henry Beaman was born. The ‘London Times’ newspaper carried the news:

On two successive days in December of the same year, ‘The Times’ bore much sadder tidings…

And on the following day… 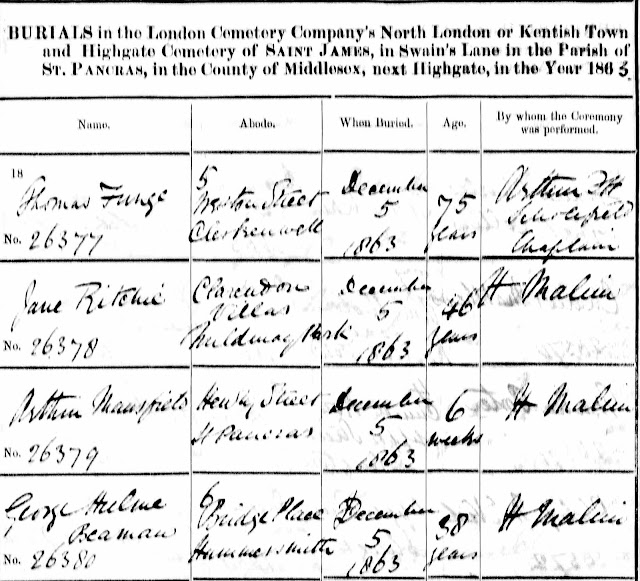 At the age of thirty three, Jane Elizabeth was left a widow with four young children to raise, the eldest nine years old and the youngest only ten months of age.
With the support of her family, Jane raised her family alone until six years later, when she married a bank manager by the name of Augustus Grain. They were married in the December quarter of 1869 in London.
Augustus was the younger son of William Grain, a Notary, and his wife Priscilla Ann Parker, who were married in 1817 at St. Dunstan, Stepney. Augustus was born on 25 August, 1825, and baptised on November 25, 1825, at St. Dunstans, Stepney.

Their first son, John Henry Grain, was born in 1820, and Augustus was baptised on November 25, 1825, at St. Dunstan.
Although Jane was in her late thirties at the time of her second marriage, she and Augustus had five children together, three of whom survived to adulthood:

Jane’s eldest daughter, Emily Beaman, attended boarding school in Kensington, London. The 1871 census showed her as a 17 year old scholar living in at her school located at 34 Ladbroke Garden, Kensington.

Jane’s second husband, Augustus Grain, was the manager of the Petersfield branch of the Hampshire Banking Company, which was located at The Square, Petersfield. He had held this position prior to his 1869 marriage, as the 1865 Post Office Directory of Hampshire has the following entry:

The Hampshire Post Office Directory of 1875 shows that Augustus has not moved on :-“ Hampshire Banking Co, ( branch of). Augustus Grain, manager. The Square; draw on the London Joint Stock Bank.”


Daughter Emily Beaman was married in late 1877, aged 23 years, to George Peter Harrison. She died in 1940, and had two children- Stuart and Mabel.

By the time the 1891 census rolled around, Jane Elizabeth and Augustus and those children who remained at home had moved to London to enjoy Augustus’s retirement. Their home was at 281 Queens Road, St. Pauls, Deptford, Greenwich, and sixty five year old Augustus was noted as ‘living on his own means’. Jane was fifty-nine, and the only children who still resided with her were 20 year old Henry Grain, a law article clerk, and his sister Jane, who at fifteen years was still at school.
Also living with the family as a domestic servant was twenty five year old Ellen Cooper.
In 1891, daughter Kate Beaman , 30, her husband Robert Bayard, 32, and their five-year-old son John were living in Cheshire.
Eldest son, George Hulme Beaman, 36, was living in Tottenham, with wife Eleanor,33, and two children- four year old Sidney G.H. and two year old Dorothy E, both of whom had been born at Tottenham. His occupation was still ‘fire insurance surveyor’. Fourteen- year old Elizabeth Andrews also lived with the Beaman family as a servant.

The turn of the new century saw the Grains still living at 281 Queens Road, although only twenty five year old Jane still lived with her parents. Augustus was noted as being seventy- five and a retired bank manager, and Jane Elizabeth was sixty- nine.
Son Henry Grain, 30, and his wife Kate, 31, were living at 2 Mount Pleasant mansions, Hackney. Henry was working as an auditor’s clerk.

Augustus Grain died in 1905 at the age of 79 years. His wife Jane Elizabeth Oakley Beaman Grain survived him by fifteen years..she died in 1920, aged 88.