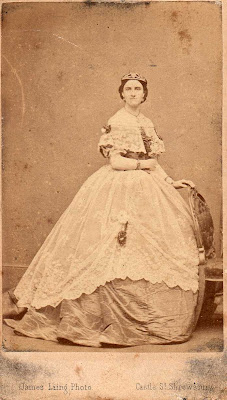 The location of Edwin Oakley and his young family in the early 1860s has been provided by the will of Jane Burlton Griffith, the great-aunt of Jane Elizabeth Oakley. Jane Griffith made the will on New Years Eve, 1860, and died the very next day. She nominated Edwin Oakley as one of three executors, and gave his address as 'Middle in the county of Salop'. By the time the will was proved, in August of 1861, Edwin had moved into Shooters Hill, and he and his family remained there for the majority of the 1860s.
The 1861 census throws up an infuriating mystery in regard to Edwin's and Jane's whereabouts on the night of the census. I can find their little boy...John G Oakley was at his family home at 'The Grove', Middle, Salop, aged 1 year. With him were his aunt, Margaret E. Oakley, aged 14, and three servants...Jane Lloyd the nurse and cook, and husband and wife Frederick and Elizabeth Morris who were the groom and housemaid respectively.
With his wife's inheritance from her aunt, and the income Edwin would have been receiving from the estate of his father, John Oakley, who had also died in 1861, he would have been able to realise his dream of living as a 'Gentleman', for a time at least. The family visited the photographic studio of J. Laing in Castle Street, Shrewsbury, in the early 1860s, and the portrait of Edwin certainly portrays him as one of the landed gentry...knee-length leather boots, riding crop, gloved hand resting on his hip. The photograph of his wife Jane, seen above, is similarly resplendent, right down to the tiara-like headpiece she is wearing.

Jane gave birth to her second child and son at Shooters Hill on New Years Day, 1863. He was named Harry Meabry Oakley, 'Meabry' being the maiden name of his paternal grandmother, Jane Meabry Oakley.He was not baptised until the following year when he was thirteen and a half months old- on February 24, 1864, Harry Meabry Oakley was baptised at the local Church at Clive. His mother at the time was just weeks away from having her third child...she presented her husband with their first and only daughter Amy Jane on March 13, 1864. Amy was baptised somewhat quicker than her brother Harry was- she was christened at All Saints Church, Clive, on April 4, 1864, aged 3 weeks.
As far as I knew, Jane Oakley had only three children prior to her death in 1871- John Griffith, Harry Meabry and Amy Jane. Last year (2008), however,I located the birth and, sadly, death of another child. Edwin Burlton Oakley was born at Islington, Liverpool, in September of 1868. 'Burlton' was a family name...the baby's maternal great-grandmother was Elizabeth Burlton, wife of Timothy Oakley.
Edwin Burlton Oakley lived for only three months. He died on December 13, 1868 at 131 Islington,Liverpool, the cause of death given on his death certificate as 'convulsions'. His mother's sister, Margaret E. Oakley, who was living with the family and present at baby Edwin's death, registered his death the following day. She gave the information that the child was 'son of Edwin Thomas Oakley, wine merchant'.
This information makes it obvious that Edwin's days at playing as a country gentleman were over. The family had left Shooters Hill and he was again working as a wine merchant.
Posted by Sherro46 at 7:10 PM