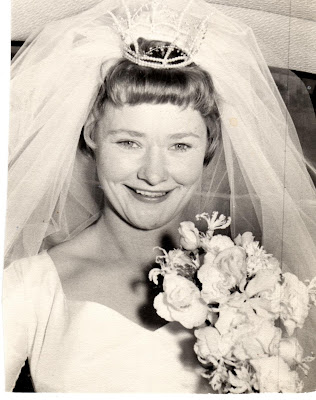 My Oakley heritage begins as recently as my own mother, Lesley Margaret Oakley (pictured above on her wedding day in 1961). Known always as "Marg", she was born on May 2, 1942, at Yarrawonga, Victoria, the first of two daughters born to Norman Meabry Oakley and his wife Ellen Ivy Brown.

Margaret's father, Norman Meabry Oakley, was the second of two sons born to Harry Meabry Oakley and his wife Olive Jessie Bishop. Norman was born in 1909, and his only sibling Harry Gordon (known always as 'Gordon') was born the preceding year in 1908.

Harry Meabry Oakley was English born and bred..he had arrived in Melbourne, Victoria, in 1887 on board the steam ship 'S.S Orient' with his younger sister Amy Jane (known as 'Jean'!)Harry had been born in the beautiful family home, Shooters Hill,near Wem in Shropshire, in 1863, the second son of Edwin Thomas Oakley and his wife, second cousin Jane Elizabeth Oakley.
Edwin had been born in London in c. 1833-34. His father was grocer John Oakley, who from 1838 until his death in 1861 was a partner in Fortnum,Mason and Co, one of London's leading and most exclusive grocery stores. Edwin and his siblings- three brothers and two sisters- were all born in London, but their father was born in Shrewsbury, Shropshire, and all of the Oakley heritage from there back is centred in Shropshire, or 'Salop' as it is known in the old records.
I think I will construct this blog along the same lines as my other family history blogs. That is, starting with my oldest known ancestor and working through to my grandfather,Norman Oakley. It may be confusing to new readers having the newest entries posted before the older ones, but anyone who is interested in the Oakley family or part of this tree should feel free to copy and paste any information and photos for their own use into a Microsoft word document and organize it any way which they see fit.
Posted by Sherro46 at 10:20 PM