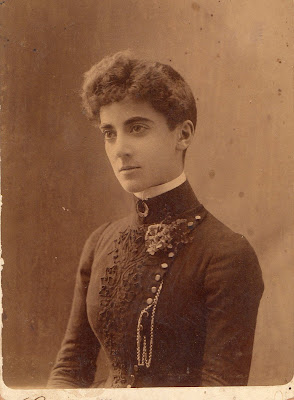 Above: This photo of Amy Jane Oakley is unfortunately undated, and the photographer's name at the bottom is cut off so we cannot even see the location it was taken.

After Jean graduated from the Leipzig Conservatorium she returned to her family in Manchester.Her brothers John and Harry were both living in Newtown in Wales, and Harry had decided to emigrate to Australia. Both he and Jean booked a passage on the steam ship S.S Orient, and at the age of 23 Amy Jane Oakley sailed off to her new country and a new life.
Jean immediately began to place newspaper advertisements to offer her services as a teacher of the pianoforte, and continued to do so over the next three or four decades.She must have taught thousands of young Melbournians how to play the piano over a career that spanned the better part of forty years.
One of Jean's advertisements was spied by my great-great grandmother Bertha Hughan Bishop, whose own mother had been an Oakley from back in England. She contacted Jean to see if any relationship existed between the two families, and although no kinship was found, Jean became an intimate friend with all of the Bishop family. In particular, she and Olive Bishop, Bertha's eldest daughter, became close friends. Olive was four years younger than Jean, and the pair shared many common interests. Jean introduced Olive to her brother Harry, and over the years their initial friendship developed into something deeper, encouraged all the way, no doubt, by Jean!
Jean Oakley made an excellent name for herself as a teacher of piano throughout Melbourne, teaching both in her own home and in the homes of private pupils.She formed many lasting friendships with both her students and their parents.
Harry Oakley and Olive Bishop finally married in 1904, and had two sons- Harry Gordon, known as Gordon, was born in 1908, and his brother Norman Meabry was born the folowing year in 1909. Their Aunt Jean idolised both boys, and they both loved their old spinster aunt. Gordon wrote of Jean:
" In later life Jean lived in Brighton where she leased large houses and rented them out on a room basis to tenants. What started as a hobby for her became a livelihood.
She collected for the Burwood Boys Home for many years from business houses all over Melbourne. She possessed and valued a very large number of influential friends, but never used them up or let them know that she had little resources financially.
Gossip she hated- she believed in taking people as she found them.
She was a staunch member of St. Andrew's Church of England in Brighton. She would never divulge her age, saying" I do not feel that age, so why boast of it? I am blessed with good health and the energy to walk and talk and listen, and make some contribution to the Burwood Boys."
Jean also declared herself a fan of eye glasses: " Spectacles are marvellous...you can see most things that you like, while you can see over or under people or acts that you don't appreciate." "

Two years ago, I was fortunate enough to make contact with Peter Scorer in England. He is related through Edwin Oakley's sister, Fanny Fortnum Oakley, who married Alfred Scorer. Amongst many wonderful pieces of information and other treasures, Peter was kind enough to send me some exerpts of letters written by his cousin Betty Scorer when she visited Australia with the de Basil Ballets Russes in Australia in 1936.Betty was the daughter of George Scorer (Fanny Oakley's son)and so would have been Jean Oakley's first cousin, once removed. She danced under the name "Elisabeth Souvorova".
She was writing back home to her mother Amy Lock Scorer in England, and several times mentioned Jean Oakley in her letters:

The other day when I was cooking the lunch, there came a faint tap on the door, & outside I found an old lady, who asked me if I was Betty Scorer. It turned out to be Amy Oakley – cousin of Daddy’s, who came out here with her brother thirty five years ago -- she had seen my picture & name in the papers & got my address from the theatre, she is quite a dear, very poor I think, she used to teach music, until her eyesight became affected, & now she collects money for a boys’ home. She says she remembers you well, as a “beautiful girl” before your marriage -- she didn’t even know it was you Daddy married -- tho’ Alfred has kept her posted with family news during all these years. She has invited me to the country house of a friend of hers next Sunday. Isn’t it odd! ………."

Very little news, Miss Oakley has been to see us several times, she is really rather a dear. She is terribly interested in the family & wants very much to see a photo of Daddy."

Otherwise we have been working very hard, & have been out quite a bit. Our potty cousin Miss Oakley took us out to some friends of hers who live in the “bush” on Sunday -- they have a lovely house and perfect surroundings -- but were frightful people. The woman is about seventy & does arts & crafts -- hooked rugs -- bark baskets etc. & is very high minded, & her husband, about 65, appeared to be a howling pansy, & made the most coy advances to Alyosha (Betty’s future husband and my uncle. P) -- & never stopped talking to me about this beautiful young man -- who “opened all the windows of the world to him!” Very sinister !"

I would LOVE to know the identity of the couple in the last letter! Jean would have been aged in her seventies when she made herself known to Betty Scorer.

EXCITEMENT!!! I have just this very second discovered that the whole collection of letters written by Betty Scorer whilst on tour to her family back in England have been digitised and are available online at
http://www.nla.gov.au/apps/cdview?pi=nla.ms-ms9915

They are described as following:

Letters from Betty Frank (nee Scorer) to her mother, Amy Scorer, in London. The letters primarily date from the 1936-1937 tour of Australia and New Zealand by Colonel W. de Basil's Monte Carlo Russian Ballet. Frank danced with the company under the name Elisabeth Souvorova.
There are two early letters written by Frank from Scotland and Liverpool, and then several letters from her tour of Europe with the Ballets Russes de Leon Woizikowsky, beginning in Berlin, 1935, and travelling through Spain and France. From September 1936 to August 1937 the letters record Frank's role as a member of the Monte Carlo Russian Ballet, as the company embarked on its tour of Australia and New Zealand.
Frank's letters provide vivid descriptions of the company's voyage to Australia aboard the SS Moldavia; places visited on the voyage and throughout the tour in Australia and New Zealand; members of the company, including Leon Woizikowsky, Alexander Philippov, Jacques Lidji, Valentina Blinova, Mira Dimina and Nina Raievska; rehearsals and performances of such works as L'apres-midi d'un faune, Contes russes and Les sylphides; cultural life in Australia; and events such as the death of Mira Dimina from leukaemia in Melbourne, November 1936, coronation celebrations in May 1937 and the Franks' marriage in Melbourne, c.July 1937.
The series includes several letters from Frank's husband, Alexis Frank, signed 'Alyosha'. There is also a letter (in French) from Colonel Wassily de Basil.
Please note: these letters have been digitised, and are available online through this finding aid (http://nla.gov.au/nla.ms-ms9915).

They are fascinating to read- please excuse me for an hour or so whilst I go and indulge myself!
Posted by Sherro46 at 10:32 PM