Before I launch into the life story of my great-grandfather, Harry Meabry Oakley, I must pause to backtrack several generations to discuss Timothy Oakley and his wife Elizabeth Burlton. Remember many blog entries ago when I mentioned that my great-great grandparents, Edwin Thomas Oakley and his wife Jane Elizabeth Oakley, were second cousins? I then went on to write the story of Edwin's father, John Oakley, with the promise of returning to deal with Jane Elizabeth's parents and grandparents.
Now is the time, and I will start with Timothy Oakley, my four greats grandfather who was Jane Elizabeth Oakley's grandfather.
As previously mentioned, Timothy Oakley was the brother of my g-g-g-g grandfather, John Oakley the Shrewsbury Grocer. Timothy was baptised on June 29, 1773, at Stapleton, the son of Richard Oakley and Margaret Meyrick.
On June 7, 1809, at Ellesmere, Shropshire, 36 year old Timothy Oakley married 26 year old Elizabeth Burlton.Elizabeth was the oldest child of John Whettall( or Whottall) Burlton and his wife Elizabeth of Cockshutt and English Frankton.She was baptised at Cockshutt on November 17, 1782. Siblings were Jane Burlton, baptised December 6, 1786, Cockshutt, and John Burlton, baptised October 28, 1788.
Elizabeth Burlton's sister Jane married John Griffith of Wem at Ellesmere on April 21, 1816, and it was this couple who owned Shooters Hill near Clive.
John Burlton the Younger married Elizabeth Oakley(baptised July 27, 1794). She was the neice of Timothy Oakley, being the only daughter of Timothy's eldest brother Richard Oakley of The Moat, Stapleton, and his wife Jane Brazenor.
I have the wills of both John Burlton the Elder and John Burlton the Younger, who died in 1819 and 1818 respectively, and will reproduce them in part later.

Timothy Oakley and his wife Elizabeth Burlton had only two children together, one of whom died in infancy. John Oakley was baptised on April 11, 1811, at Church Pulverbatch, Salop, the first child of Timothy and Elizabeth Oakley.This is the only record located for this John Oakley, but he must have died very young as Timothy's and Elizabeth's next child was also named 'John'. NOTE: The online publication of digitised parish records from Shropshire have shown that the two baptismal records of John Oakley, child of Timothy and Elizabeth, are in fact records for the same child. The first baptism was a private baptism, and the second was in the church at Pulverbatch. 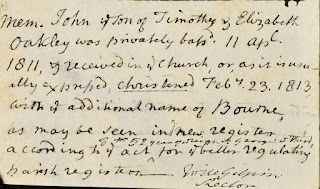 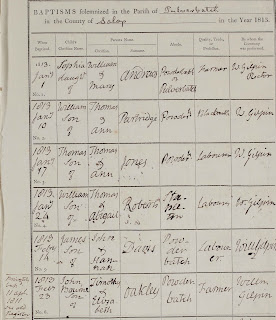 John Bourne Oakley was baptised at Pulverbatch,Salop,on February 23, 1813, the only surviving child of Timothy Oakley and Elizabeth Burlton.The small family moved north to English Frankton, where both Timothy and Elizabeth died in the early 1820s.
Timothy Oakley died on June 29, 1821, and his wife Elizabeth on March 10, 1822.
From the national Burial Index for Shropshire:
Burials for OAKLEY in the parish of Cockshutt SS Simon & Jude
Timothy OAKLEY buried 4 July, 1821, aged 48, of Frankton; born c. 1773
Elizabeth OAKLEY buried 16 March, 1822, aged 39, of Frankton, born c. 1783

Both Timothy Oakley and his wife Elizabeth Burlton Oakley left very detailed wills. I obtained copies of both wills from the wonderfully helpful staff at the Lichfield Record Office, but unfortunately the size of the pages make it difficult to scan for reproduction here. A translation of the wills, or parts thereof that are interesting, will be included in the next blog entries.
Posted by Sherro46 at 5:26 PM