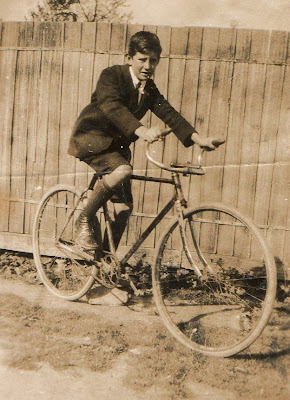 Norman's initial schooling was done at Mulwala Public School. He finished there in 1922 when he had just turned 13, and then was awarded a bursary to study at Albury High School in 1923. Whilst away he boarded with a lady named Mrs. Coglan, returning home to Mulwala for school holidays.
Of the two brothers, Norman was the more outgoing one, and the one most likley to find himself in scraps.During his holidays he would trap and skin rabbits for pocket money, and spent a huge amount of time swimming in the Murray River that seperated the two towns of Mulwala and Yarrawonga.
There were also tales of stolen watermelons being swum back across the Murray, and the gong being stolen from the bell in the Scared Heart Catholic Church in Yarrawonga.
After his schooling was completed, Norman followed in his brother's footsteps and joined the building industry.
Posted by Sherro46 at 6:34 PM