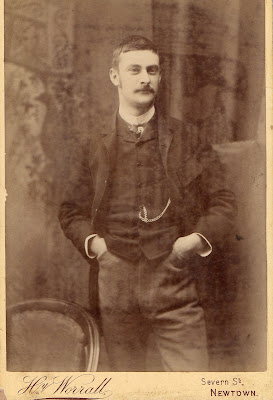 Above: This photo of Harry Meabry Oakley was dated on the reverse "Easter 1887", which in that year fell on April 11. Harry would have been aged 24, and was just months from sailing to Australia.

Our family is very fortunate to have a detailed account of Harry's voyage on board the 'Orient' written by Harry himself in the style of a letter to an unnamed friend back home. It is in the form of a carbon copy book, in which Harry would write the day's entry to his friend using a piece of carbon paper underneath the sheet he was writing on, leaving the carbon copy in the book when he ripped out the original for posting.
I have scanned the 60 plus pages of Harry's copy book, and will post them here as well as the transcription that I made. In addition to it being interesting and something that I would like to share with other researchers who may have had an ancestor travelling on the same voyage, I live in fear of something happening to destroy the actual copy that I have...posting such items in this blog will hopefully preserve them in case of my house burning down!
I'm not sure about just how to post the 'journal'...the only downfall of blog format is that it reads backwards, so that the last entry will become the first when I finish entering it.I suppose that doesn't really matter- it isn't a hugely complex concept to have to get your head around!
So...here it is. Firstly, the original pages from Harry's account, followed by my transcription.
Posted by Sherro46 at 4:08 PM