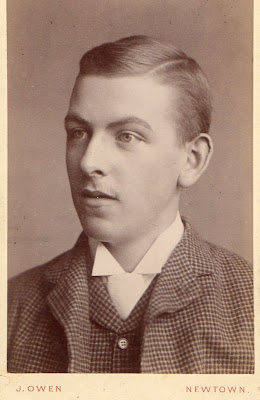 Like Harry Oakley, we know that George Rees was in Newtown in the 1881, but in Melbourne by 1887 because he was there to meet Harry when he got off the ship. The Vic unassisted shipping records has only one possible entry that could be George:
“ Mr. Rees arrived November 1887 aged 22 per ‘Manapouri’.”
If this is George Rees,which I believe it is, there presents the possibility that he and Harry back in Newtown made the decision together to travel out to Australia to further their prospects.
According to his son Gordon Oakley, Harry was employed initially by Kirkby & Co, a firm of Wine and Spirit Merchants Located at 300-302 Flinders Street, Melbourne. He worked there as a cellar man for five years, until November of 1892.
Back in Newtown, Harry had been the youngest ever Lodge Master of the Oddfellows Lodge in the town. He had carried with him to Australia splendid references from fellow Lodge members, and was bitterly disappointed upon his arrival that Melbourne Lodge members did not use their influences to assist him.
Harry's first trip to Mulwala, his future home, came during his first few years in the colony when he went with friends to the Murray River town on a shooting expedition. Mulwala is on the NSW side of the Murray River, with Yarrawonga being its 'twin' on the Victorian side.
Harry fell in love with Mulwala and the local area, and decided to make it his home base.With a partner named Faulding, he set up a travelling drapery business which was conducted from two large covered wagons. Initially, Harry made his business headquarters under a large box tree close to Smart's Blacksmith Shop.Harry was mainly on the road with his wares, visiting settlements- farms and stations - from Mulwala to beyond Deniliquin and throughout the Riverina.
Roads at this time were little more than rough dirt tracks so keeping to a regular timetable was a formidable task, but when shearing began at a shed on his route, Harry and his teams would turn up. An article published in the local Yarrawonga newspaper when Harry turned ninety stated:
" After working in Melbourne for five years, he came to Mulwala in 1892, and with a partner by the name of Faulding,established a prosperous business as travelling drapers.They began their business with a small cart and horse,but business improved so much that in later years they used a big cart drawn by five horses.The roads in those days were terrible, and Mr. Oakley has many stories to tell of difficulties encountered in taking their wares to settlers."
During these early years in Mulwala, Harry still made the occasional trip to Melbourne where his sister Amy Jane was residing and earning her living as a teacher of piano.She had made numerous friends,including the Bishop family of Oakleigh. Bertha Bishop, the mother of a family of two sons and four daughters, had contacted Amy after seeing her advertisement for piano lessons in a local paper. Bertha's mother's name had been Hannah Oakley, and she was curious to see if any family relationship existed between the young Englishwoman and herself. There wasn't a family tie, but a very close friendship developed between Amy and the Bishops, and in particular between Amy and eldest daughter Olive Jessie Bishop, who was four years Amy's junior.
Harry Oakley in turn was introduced into the Bishop family circle, and friendship grew between he and Olive, encouraged no doubt by his sister. Still, it was some years before friendship blossomed into love...Harry was 41 years old and Olive 35 when they finally married in 1904.
Posted by Sherro46 at 12:05 AM