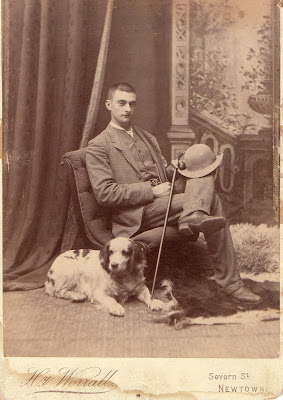 Above: Harry Meabry Oakley at the age of 21 years. This photo was taken in Newtown, North Wales, and on the reverse is written " September 1884, Harry at 21." It comes from the album of Harry's sister, Amy Jane Oakley.

Harry remained living with his family for several years after the 1874 marriage of his father to his stepmother Elizabeth.The family often changed their address, but remained in the general Manchester area. A new sibling, Albert Oakley, joined the family in 1875, but by the time two more children were born to Edwin and Elizabeth in 1882 and 1887, Harry had removed himself to a new life and job in Newtown, North Wales.
The Issard family of Newtown had established the Crown Brewery in the town in 1831. Thomas Issard, born c. 1793,married Susannah Davies in 1825, and the couple had issue Sarah, Jane, Elizabeth, Mary Ann, Eleanor, Susannah, Thomas Edward, John, William and George.
Thomas Edward Issard was born on August 5, 1837, at Pontesbury, Shropshire. He married two sisters...firstly,Mary Ann Humphreys(1844-1873) in 1863, and then after her death Thomas married her sister Elizabeth Humphries (1846-1899). From his first marriage to Mary Ann Humphries, Thomas Edward Issard had issue Walter Newell( b c. 1864);Millicent (b 1865); Ada (b 1867) and Bessie Mabel( b 1870)
From his second marriage to Elizabeth Humphries,two sons and two daughters were born: Thomas Edward( b 1875); Charles Percy ( b 1877); Dorothy ( b 1879) and Ethel Annie ( b 1884).\
It was Thomas Edward Issard, born 1837, who became the employer of Harry Oakley.A letter of recommendation written by Thomas Issard for Harry in 1887 stated that he had known Harry for almost 12 years (putting their year of introduction as c. 1875) and had employed him for about eight years ( c. 1879)
1879 was the year in which Harry's maternal aunt, Margaret Oakley, had died from complications after delivering an illegitamate baby...with the strained relations between Harry and his father already in place, perhaps this was the catylyst that finally led to Harry breaking away from his father permanently.
The 1881 census shows Harry living in Newtown, Wales, with Thomas Issard Senior.
Posted by Sherro46 at 5:26 PM