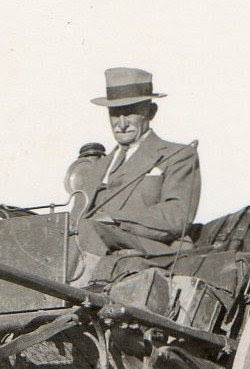 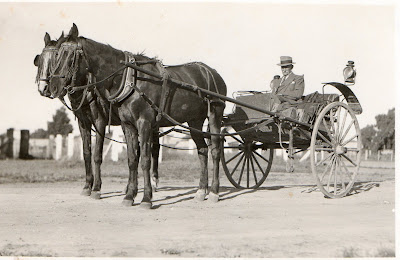 After Harry sold his drapery business, he obtained a job with 'Sammons & Edwards' of Corowa, again travelling around the district selling items from his wagon. This time, however, he was selling farm supplies, Massy Harris machinery and insurance.
In 1906 the local Corowa Oddfellows hall was sold to Mr Sammons, a local timber merchant who, with his partner Mr Edwards, added a new section to the front of the building in 1912 and used it for many years as a hardware store and timber sales yard. This was Harry Oakley's new business headquarters for the next four years, until he again changed employers.
Harry accepted another travelling position, this time as a wool buyer for Farmers & Graziers of Albury NSW. His district extended from Savernake to the upper Murray regions.Initially his means of transport was a Model T Ford car, but he loathed this form of transport and soon switched back to his beloved horses and a sulky (see above).
When visiting the upper Murray districts, Harry would be away from home for six weeks or more.It was a lifestyle he loved, and he remained with the job until ill health forced his retirement in 1941, aged 78 years. Although retired, he still maintained a keen interest in the wool industry and rural Australia.
Posted by Sherro46 at 12:10 AM