Harry's Life away From Work 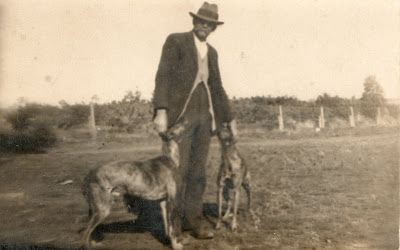 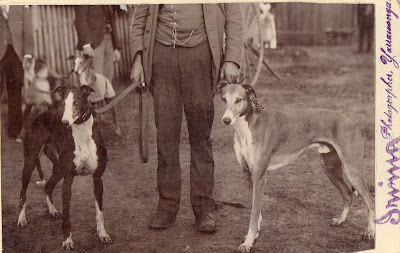 Harry loved dogs all of his long life, both as pets and for sporting pursuits.His love of coursing had started in his youth back in Shropshire and Wales, and continued when he emigrated to Australia.He was a keen follower of both open and closed coursing, and owned some of the finest coursing dogs in NSW and Victoria at one time, the most notable being a dog by the name of 'Black Star'. Harry formed a partnership with a man named Walter Smart, and the pair owned and raced some very good dogs, but without overall profit.
Although Harry and Olive were older parents, they raised both of their sons to be fine young men and saw their younger son married and the birth of their first grandchild before their deaths.My mother Margaret Oakley was born in 1942, the daughter of Norman Oakley, and she had fond memories as a little girl of her Oakley grandparents who lived across the River in Mulwala.
Harry and Olive also lived through the worry of their eldest son Gordon joining the Army and fighting overseas during World War 2.Olive and Gordon were excellent corrrespondents during the war years, and Gordon saved all of his mother's letters. It is a tragedy that for some unknown reason, his wife Evelyn burned all of Olive's letters some time after her death. Thankfully,Gordon's letters to his mother still survive.
Posted by Sherro46 at 12:56 AM