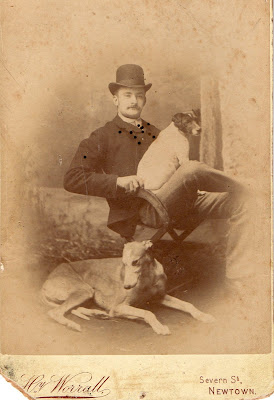 Harry Oakley's elder son, my great Uncle Gordon Oakley, wrote the following about his father when I started asking questions about the family way back in the mid-1980s:-
" Harry Meabry Oakley was born on January 1, 1863, at Shropshire, England. On the death of his mother he was sent to Newtown in Montgomeryshire,Wales, to Mr and Mrs Izard who owned a brewery. He learned brewing and the administration side of the business.
His mother left him money which he used to live well. He was a member of the Mounted Yeomanry, a volunteer military force. Expenses were carried by the member who hired a groom to attend to horses and equipment.
Coursing, hounds and field shooting were other expensive past-times.
With bank balance diminishing, he sailed for Australia in company with his sister, Amy Jane Oakley-known as 'Jean'- on a steamer called the 'S.S Orient'. "

Of course, Harry was only eight years old when his mother died in 1871, and did not go to Newtown until c. 1879 when he was 15 or 16 years of age.Similarly, he would not have been able to access any of his mother's estate until he turned 21 in 1884, when it is apparent from Gordon's letter that he began to live life to the very fullest!
Harry Oakley loved dogs both for sport and as companions, and the big photograph album that he brought with him from Newtown when he sailed for Australia has several photos with dogs as the only subject. There are many photos of his friends and work acquaintances from Newtown, and it is a huge shame that so many are not named. I will endeavour to post the photos in this album elsewhere in this blog.
Harry remained in Newtown from 1879 until 1887, and during the early 1880s he was joined by his brother John Griffiths Oakley.John remained in Wales for the rest of his life, marrying a local Newtown girl and investing in the Crown Brewery.He ended his days in relative poverty, largely estranged from Harry in Australia.
While Harry was never again close to his father Edwin after he remarried, he kept in touch with his grandmother Jane Meabry Oakley, Edwin's mother.A letter written by Jane Oakley to Harry in 1882 talks about a prospective visit by him to London, and also about John, Harry's brother, being in Newtown.
I have no idea why Harry made the decision to emigrate to Melbourne.Uncle Gordon spoke to me about Harry having been engaged to a girl when he left Newtown, but after she later joined him in Victoria she so thoroughly disliked Australia that she returned home. No names or places were given in this family story, so I can't verify the degree of truth it contains, if in fact any!
Posted by Sherro46 at 11:24 PM