Break-through on the Meabry/Rishforth Line!!! 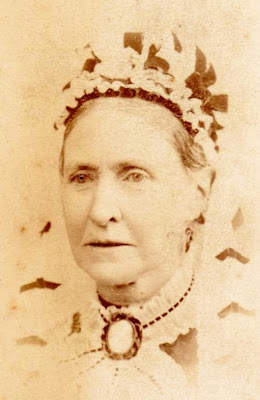 Well...it has been a long absence from me here as I have been busy chasing down the other lines of my family tree, but a discovery in a major Oakley line has sent me rushing back to share what I have found.
The line in question is that of my great-great-great grandmother, Jane Meabry, (pictured above) who married London grocer John Oakley in 1827. Jane and her siblings were born in London, the children of grocer John Meabry and his wife Elizabeth Rishforth, both of whom died in 1841. John and Elizabeth had married by license on July 9, 1793.
Nothing much is known of the Meabry family, beyond the fact that they originated in Shropshire. Even less had been discovered about the Rishforth family...apparently the name is a variation of the far more common Rushforth and Rishworth families. The only information I had regarding Elizabeth Rishforth Meabry came from the 1841 census return, which simply told me that she had been born in the county of Middlesex in c. 1776. Searches for Rishforths born in Middlesex in the period 1770-1790 provided no matches so the Rishforth family was placed on the back burner for future inspiration.
I discovered the existence of a sister of Elizabeth Rishforth quite by accident, through researching the children of Eizabeth Rishforth and John Meabry in the early census returns. In 1822, two of the Meabry sisters, Martha and Sarah Meabry, had married two Keysell brothers, Richard and Henry.
Sarah's husband, Henry Keysell, died in 1833 at the age of 44 years, leaving Sarah with three small children. The 1841 census found Sarah and her two daughters, Sarah aged 15 and Julia aged 9, living in Museum Street, Bloomsbury. 14 year old son Henry was living away from home at a school in West hackney.
It was while I was looking for Sarah Meabry Keysell in the 1851 census that I found my breakthrough. She was living at Temple House, Newsham, Whitkirk, in Yorkshire, with her 81 year old widower uncle, John Patchett, and various other relations and servants.
The name PATCHETT rang bells for me immediately, as three of the Meabry siblings had, after their respective marriages, given children the middle name of 'Patchett'....Sarah Patchett Keysell, daughter of Sarah Meabry and Henry Keysell born in 1822; George Patchett Maber, son of Mary Eliza Meabry and George Maber born 1824;and Julia Patchett Meabry born 1844, daughter of Charles Meabry and Ann Cade. I knew the name must have had family connections somewhere, but it wasn't until I found Sarah Meabry Keysell living with a rich old man in Yorkshire and described as his niece that I could work out exactly what the connection was.
A marriage entry for John Patchett marrying Sarah Rishforth on 16 June 1813 at Whitkirk, Yorkshire, solved that mystery, and the location of John's will threw up still more information.
Sarah Rishforth Patchett had died in 1845, and there were no children of the marriage. This left the very wealthy John Patchett to make numerous bequests not only to his own blood family, but also to his wife's side. The bequests that concerned our Meabry/Rishforth lines were:
- My three messuages or dwelling houses situate in Elmswood Grove, Leeds, to Mrs Sarah Keysell, widow of Henry Keysell, late of Leeds, also 40 shares in the _ Stock Bank at Leeds called the Leeds Banking Company.
-All my plate, linen, china, glass, printed books, paintings, portraits, prints, pictures, and other household goods and furniture to Mrs Sarah Eccles and Mrs Sarah Keysell equally between them.
-Henry Keysell, one of my executors, one thousand pounds sterling and 20 shares in the Leeds Gas Light Company.
-Each of his two sisters Sarah Patchett Keysell and Julia Mary Keysell 1,000 pounds sterling.

- 500 pounds upon trust to be invested for the use of Mrs. Ann Meabry.


No wonder the Meabry siblings were bestowing upon their children the middle name of 'Patchett'...this was one seriously rich Uncle!!!
The 1841 census stated that Sarah Rishforth Patchett, sister of my Elizabeth Rishforth Meabry, had been born in Yorkshire, as opposed to the same census return stating that Elizabeth had been born in Middlesex. This information about Elizabeth's birthplace had never felt "right', and I had not been surprised that I had never found Elizabeth or her Rishforth family in Middlesex.
I started having a little look around Yorkshire online records, and amongst other things found, on Origins, a reference in an index of Yorkshire wills to a John Rishforth who had died in Leeds in 1802. I was able to order a copy online through Origins, and when the document arrived I was over the moon with its contents.
The John Rishforth who had died in Leeds in 1802 was indeed my great-great-great-great grandfather, and the father of Elizabeth Rishforth Meabry and her siblings. Although relatively short, his will gave me the names of all of his living children, and the married names of his daughters. I will reproduce the will in greater detail in the oncoming blog entries, but briefly the information given was as follows:
- ...unto my three sons in law Mr John Simpson, Mr Robert Snowden and Mr William Smith.
-...my dear wife Mary Rishforth
-...my son John and unmarried daughter Sarah.
-...My daughters Mary the wife of John Simpson; Martha the wife of Robert Snowden; Elizabeth Meabry; the said Sarah Rishforth and Margaret the wife of William Smith.
John's occupation was a butcher, and when he died in Leeds in 1802, he was 74 years old, putting his year of birth as c. 1728. His wife Mary died in 1808, aged 74, making her approximately six years younger than her husband. I found in Google Books an interesting but frustratingly incomplete entry from a publication of the Thoresby Society, Vol 10, Vol 33:
" Here lie interred the bodies of four children of John Rishforth, who all died in their infancy. Also the body of Christopher son of the abovesaid John R. who died the 26th day of August 1766 in the 7th year of his age. Also the body of Christopher son of the aforesaid John R. who died the.... (missing)
...Also the body of Robert Rishforth, son of Robert Snowden and grandson to the above John Rishforth who died 1st January 1794 aged 4 years. Also the body of John R., father and grandfather to the above children w.d.t.l May 15th, 1802, aged 74 years.
Also the body of Mary, wife of the abovesaid John Ri. w.d.t.l March 24, 1808, aged 74 years. Also the body of Martha Snowden, mother of the above Robert Rishforth S. who died November 10, 1838, aged 70 years.
When searching for the children of John Rishforth in the IGI, the following entries were located:
* Christopher Rishforth, born November 6, 1759. Baptised December 13, 1759, St. Peter, Leeds
*Mary Rushforth born November 21, 1763, baptised December 28, 1763, St. Peter, Leeds, daughter of John Rishforth.
* Martha Rushforth born November 21, 1766. Baptised December 26, 1766, St. Peter, Leeds, daughter of John Rushforth.
*Christopher Rushforth born July 20, 1776. Baptised August 21, 1776.
*John Rushforth born September 25, 1757, baptised October 27, 1757.
*Margarett Rushforth born January 16, 1772; baptised February 19, 1772.
*Sarah Rushforth born May 27, 1770; baptised May 2, 1770.
*Elizabeth RushWorth born May 26, 1768 baptised June 23, 1768.
Sarah RushWorth born August 3, 1767; baptised November 5, 1767.
All of the above baptisms were conducted at St. Peters, Leeds, with the father noted as being 'John'. Mothers names were not stated.
Posted by Sherro46 at 7:56 PM