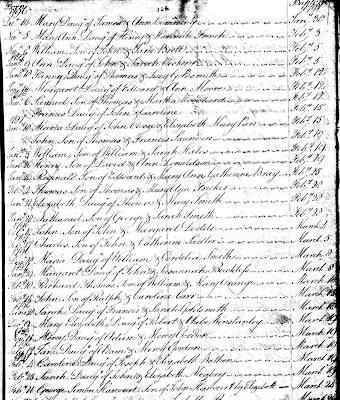 Above: Baptism entry from St. George, Bloomsbury, for Sarah Meabry, the third daughter of John Meabry and Elizabeth Rishforth. 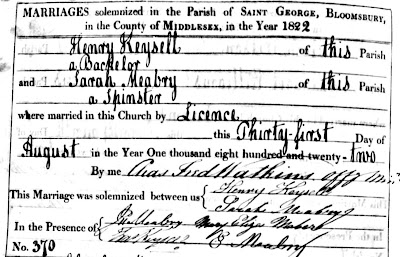 Above: Sarah Meabry married Henry Keysell at St. George, Bloomsbury, in 1822. Sarah Meabry was born on February 25, 1797, at 1 Broad Street, Bloomsbury, the third daughter and child born to grocer John Meabry and his wife Elizabeth Rishforth.


Unlike his brother Richard who remained in the cheesemonger business, Henry had decided that his fortune lay in other directions. In 1820, the partnership between Francis Keysell, his eldest brother, and himself had been dissolved: "Keysell F and Keysell H, Broad Street, Bloomsbury, cheesemongers. Dissolutions of partnerships between October 29 and November 21, 1829".

In their father Francis Keysell's will of 1804, he had specifically requested that his sons, Francis and Henry, who were then under the age of 21 years, should join in partnership and continue with the business after his death.."...and I hope they will carry on the trade jointly and amiably for their mutual benefit." The Keysell family's involvement with the Broad Street cheesemonger business extended back into the 18th century.

There is a notice in the London Gazette from July 24, 1789, that reads as follows: " Francis Keysell and O_hea Olney of Broad Street, in the Parish of St. George, Bloomsbury, Cheesemongers, respectfully return their thanks to their friends in particular and the public in general and acquaint them that they have this day, by mutual agreement, dissolved and determined their partnership. All persons indebted to them are desired to pay their respective debts to the said Fancis Keysell, of Broad Street, aforesaid, and all persons who have any demand on the said partners are desired to bring in the same to the said Francis Keysell in order to their being discharged. N.B. The business in future will be carried on by the said Francis Keysell and James Rice."

The London Directory of 1794 has an entry for "Keysell and Rice, Cheesemongers, 7 Broad Street, Bloomsbury", and the same appears in 1797.


After Francis Keysell Senior's death in 1804, the business was managed until Francis Junior and Henry reached the age of 21, which occurred in 1806 and 1810 respectively. They obeyed their father's wishes and ran the business together until the dissolution of their partnership in 1820. Francis continued with the business, and brother Richard was also involved. Henry Keysell moved from Bloomsbury and took up residence at 4 Southampton Place, Euston Square. An entry for "Keysell, Henry, Esq, 4 Southampton Place, Euston Square' was located in the Boyle's Court Guide for April 1824. On the baptismal entries for his four children, Henry's occupation was given as "coal merchant". Henry and his wife Sarah had two sons and two daughters, three of whom survived until adulthood:

Between his son John's death in July of 1832, and his own death in August of 1833, Henry Keysell moved his family from Southampton Place to 17 Museum Street, Bloomsbury. It was here that Henry died on August 11, 1833, aged 44 years. He was buried at St. George, Bloomsbury.

In the census return of 1841, Sarah is still an oilman, living in Museum Street with her daughter Sarah, 15, and Julia, 7. Also residing with them are Elizabeth Haselton, 2o, and William Gridlestone, 15, servants, and 20 year old Alfred Lee, an oilman's assistant. Son Henry Keysell, aged 14, is not in the family home because he is boarding away at a school in West Hackney.

Sarah Patchett Keysell and Charles Stewart Eccles were second cousins as their grandmothers, Elizabeth Rishforth Meabry and Mary Rishforth Taylor, were sisters. Charles Stewart Eccles was the son of Sarah Taylor, Mary Rishforth's daughter, and her husband Richard Eccles. He had been born on October 11, 1826, at Wakefield, Yorkshire, and had at least one sibling, elder brother Richard Eccles, who with their mother lived with her maternal John Patchett in Temple House near Whitkirk, Yorkshire.
Prior to his marriage to Sarah Patchett Keysell, Charles Eccles had been living at Sculcoates, Yorkshire, as a grocer and tea dealer, with two assistants and a house servant.

Unlike her brother and elder sister, Julia Mary Keysell did not marry. She lived for many years with her widowed mother Sarah Keysell at their home in The Grove, Verulam Terrace, Hammersmith, remaining there even after her mother's death in 1887. In the 1891 census Julia was living at The Grove with her servant, Alice Hockett, aged 28, who was to remain with her for the next twenty-plus years.

In the census return of 1901, Julia Keysell and Alice Hockett were residing still at The Grove, Hammersmith, and joining them was Julia's 44 year old unmarried niece Amy Julia Eccles (the daughter of Julia's sister, Sarah Patchett Keysell Eccles).
In 1911 the three women were still living together, but had moved to 39 Webster Gardens, Ealing. It was here that Julia Keysell died on July 19, 1916, aged 84 years. She left an estate worth over 11,222 pounds. Her niece Amy Julia Eccles died on November 25, 1929, at 76 Drayton Gardens, Ealing, and her estate was valued in excess of eight thousand pounds.

Of the two Keysell siblings who married, Henry and Sarah Patchett, both had families with their respective partners.

Henry Keysell, a bank clerk/cashier, and his wife Mary Hannah Eyres, had two children- a daughter Clara Helen Keysell was born on April 19, 1853, in Yorkshire, followed the following year by a son, Henry Keysell. Sadly, neither child married or produced any issue: son Henry died in 1880, aged only 25, and in a strange quirk of fate that definitely needs further investigation, daughter Clara Helen died on the same day as her mother Mary Hannah Eyres Keysell, October 1, 1906, both in the family home at 48 Shalimar Gardens, Acton, Middlesex.

Both mother and daughter had the probate of their estates granted to Sarah Tucker, wife of John Dennis Tucker. Research revealed that Sarah Tucker was Mary Hannah's sister and Clara's aunt...Sarah Eyres had married John Dennis Tucker, a bank cashier, in Yorkshire in 1860. They had a large family of daughters- Florence, Alice, Laura, Clara, Jessie, Sarah and Evelyn Tucker- all born in Headingley in Yorkshire.

Henry Keysell, son of Henry Keysell and Sarah Meabry, died on 11 September, 1875, at his home, 5 Park Villas, Chiswick. When his wife and daughter died in 1906, the family line of he and his wife Mary Hannah Eyres ended.

Sarah Patchett Keysell and her husband Charles Stewart Eccles had a family of three daughters and one son:


Of the four Eccles siblings, only one married and had a family...Sarah, Amy and Charles all remained single, but Constance Annie married editor and newspaper proprietor Joseph Carlill Savill, in 1891. They had a family of seven children: Constance Keysell; Stewart Carlill ; Amy Victoria; Dorothy Vida; Christina May; Frank Keysell and Cyril Henry.